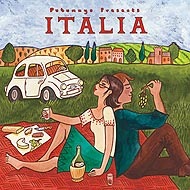 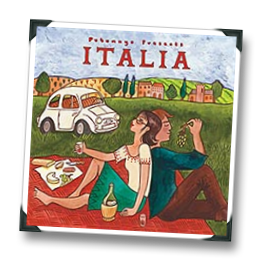 Anyway, if YOU want to win one of the five giveaway copies of Italia, all you need to do is leave a comment on this post telling us about what stemware you use to drink your wine, and why.  Using a secret process that involves my dog, I will randomly select five winners from the comments.  It could be YOU!…

My curiosity was whetted recently when a few way-cool folks on twitter shouted out what they were using to temporarily hold their wine in between its delivery from the bottle to their mouths (the hashtag is kind of a long story… just go with it…).

I’ll get things started here by telling you about my take on stemware, and what stemware I happen to use (and why).

My take on stemware

When it comes to wine, stemware does matter; just not as much as the stemware companies would like you to believe.  If you really want to taste a wine and not just drink it, you need a clear, unadorned tulip-shaped glass with a relatively thin rim.  It can be used for red or white wine, the important thing is the tulip shape, which a) allows some room for the wine to get air in your glass when filled properly, and b) focuses the aromas towards your nose by tapering at the top (this also provides the ancillary but important benefit of allowing you to swirl the wine with less chance of spilling it all over your pants).  That’s the most that most people ever need to know about wine stemware. 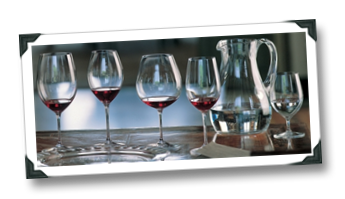 If you’re willing in terms of time and spare cash, things can get exponentially complicated from there.  But it’s certainly not necessary in terms of enjoying wine everyday.  In fact, you can get tulip-shaped glasses at many locations in the U.S. and if they’re relatively cheap, even better since you won’t sweat it when you break some of them (and you will).

I’m one of those people who like to make my passions complicated, so I do have various pieces of wine stemware (including some without stems… which I’m still going to call “stemware” because I don’t feel like typing “stemware-that-doesn’t-have-a-stem”).

I like Riedel stemware for my wine-drinking purposes (I’m not affiliated with them in any way, though if they’re reading and want to send me lots of free stemware I’m willing to at least discuss it).  Just a bit of warning: their website is difficult to navigate (at best).  Anyway, they have some interesting cheaper options, interesting ultra-expensive options, and just about anything in between (in fact, they probably have too many offerings and their product lines are just about as confusing as their website).

The Riedel sweet-spot for me in terms of price / quality is the Vinum series – though at an average of $25 a stem, they are not cheap; but they look good and aren’t ornate. I use the tulip-shaped Bordeaux glasses for reds, and the slightly smaller but similarly shaped Chablis glasses for whites, regardless of the variety, and they work just fine for us.  We also have a few of the “O” stemless series, one of which is a wider-bowled shape for drinking Chardonnay, but they don’t get too much use at my pad. 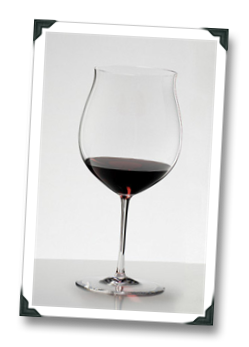 I have two exceptions to the “simple tulip-shaped glass” rule.  One is a very expensive exception – we have two of Riedel’s top-of-the-line Sommelier series Burgundy glasses.  These are specially shaped (according to Riedel) to enhance the flavor and balance of really good Burgundy / Pinot Noir, and they run about $125 a stem (se inset pic).  I can confirm from several personal experiments drinking Pinot Noir wines from this and other glasses side-by-side that they really do enhance the flavor and balance of Pinot Noir wine.  They just don’t do it cheaply.

The other is for dessert wines.  Typically, a dessert wine pour is smaller than a normal glass of dry or semi-dry wine, and at the risk of sounding like a total dork, I find that the glass really needs to tapper more sharply to concentrate the aromas of the stickies.  Anyway, I ponied up for two Riedel Vinum Extreme Icewine/Dessert glasses to see if they’ll do the trick – I’ve not tried them yet so will probably do that and report on the results in the comments (I am ineligible of course for winning one of the copies of Italia…).

So what stemware are YOU using?  Shout ‘em out in the comments!

32 thoughts on “Giveaway! The Stemware Edition!”