When Playboy.com asked me to put together a primer on Champagne (for the NYE celebration holiday season), I was sporting a seriously large sh*t-eating grin on my face. 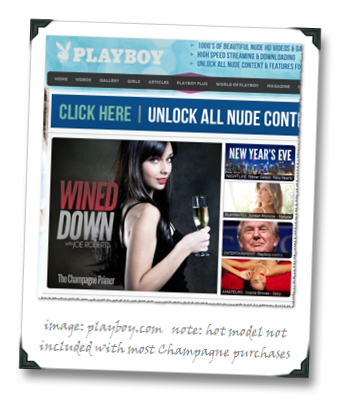 I mean, c’mon… the homework involved in that requires me to raid the sample pool for all of the Champers I could get my grubby little paws on; and while there are many strong contenders outside of the region, when it comes to sparkling wine, a strong argument can be made that Champagne still reigns supreme. Just try finding wine geeks who don’t like it… (now there’s a needle-in-the-haystack treasure hunt for you).

Put another way: there are far worse assignments, okay?

Interestingly, while the annual New Year’s Eve run-up on sparkling wine articles was in full-force (I think there were more of those in the last week of December than Lindsay Lohan rehab stints), the most interesting piece of bubbly news at the close of 2012 came from NPR, of all places…

The NPR story, by Allison Aubrey, bears the unfortunately banal title of “Cheap Bubbly Or Expensive Sparkling Wine? Look To The Bubbles For Clues” but contains a very interesting scientific tidbit. To the tape (emphasis mine):

“Here’s one tip if you want to preserve the effervescence in every flute of bubbly: Pay attention to how you pour. The traditional way is to pour Champagne straight down into the flute. But Liger-Belair says you may be losing thousands of bubbles this way. In a study published in The Journal of Agriculture and Food Chemistry, Liger-Belair and some colleagues found that pouring champagne down the side of a tilted glass, similar to the way beer is poured, preserved about 25 percent more carbon dioxide. This technique has not taken off in France, where Liger-Belair says no one wants to liken Champagne to beer. But scientifically, it’s clear. If you want more bubbles — to tickle the tongue and transfer those wonderful aromas to your nose — try the tilted pour.“

Check it out, because there are visuals to go along with the text that are quite compelling in terms of comparing the types of pours, and how much bubbly action gets preserved in one method versus the other. Note that the article also mentions that the French, undaunted by things like science, have been slow to adopt the tiled pour technique, presumably because they want their Champers to taste flat.

Anyway… back to what’s supposed to be the focus here today… while I’m fond of saying that Champagne can actually be a bargain considering the production costs and overall quality that you’re getting for the money, in my hunt to guzzle sample all of the Champers I could in preparation for that PB column article I found quite a few rip-offs.

Which makes the wine I’m recommending today feel even better to me.

As part of my PB homework, I busted into a pack of samples I received of “Farmer Fizz” – Champagne made not by large shippers or cooperatives, but by individual estate growers who make their bubbly independently, utilizing a minimum of 95 percent of grapes from vineyards that they own themselves. These are also known as Recoltant-Manipulantsand are designated with an “RM” on the label, usually in font small enough for only paramecium to see without some sort of magnification.

There were several very good selections in that group of wines, but what struck me was that one of them was just as good as all of the others, and was the cheapest bottle in the bunch.

At $30 it’s still not cheap, but it also performs just as well as other Champagnes that I’ve sampled recently that were literally priced three times higher. God bless those farmers! And now you know how to best pour a bottle of this… if you’re down with science, that is… 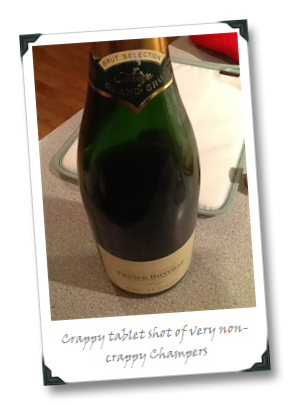 The price is, actually, creeping up but you can still find this for about $30 if you look hard enough. This is a linear, nervy, refreshing and floral Chardonnay-based wine (which you’d totally expect from Champagne). It’s also an abundantly fruity, ripe, generous and peachy wine (which you wouldn’t necessarily expect from Champagne). Tension (that hallmark of wines knocking on the door of awesomeness) comes via the juxtaposition of cream, bread and nut aromas pitted against a dust-from-the-quarry chalky minerality. I suspect that, depending on the weather, barometric pressure or some other miscellany, that the rating would’ve been A-. Whatever; buy a bottle and make up your own damn mind!

13 thoughts on “A Post-Holiday Bargain Bottle Of Farmer Fizz (And How To Pour It!)”