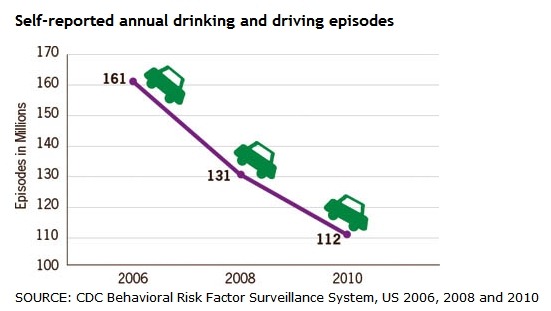 The irrepressible Tom Johnson reported recently  on Louisville Juice that according to the CDC drunk driving in the U.S. continues its steep decline – to the tune of a 30% drop in self-reported annual drinking and driving episodes since 2006.

Your first reaction to all of that good news (and it is very good news – because also according to the CDC, “car crashes are the leading cause of death for everyone ages 5-34 and that 1 in 3 crash deaths involves a drunk driver” – so any drop in drunk driving equates to a potentially significant reduction in preventable fatalities), like mine, was probably “holy crap, that’s awesome!”

But… it’s not quite time just yet to pop the bubbly in celebration (assuming of course that you’ve got a designated driver if not popping those corks in the safety of your own home!). As someone who often has to drive myself to and from functions where alcohol is involved (in the function, that is, not in the driving!), I’m the kind of guy who often pays particular attention to trying to do whatever I can to prevent tragic alcohol-related disasters. Rule the first at wine events: SPIT (and gently admonish organizers if they don’t provide spit cups or buckets)!

And while we’ve come a long way, baby, in terms of one of those tragic disasters (drunk driving), we’ve also got a long way to go, baby…

In its latest findings, the CDC also included some (for lack of a better term) sobering statistics related to drunk driving in the U.S.:

What does this tell us?

While it’s difficult to draw any definitive conclusions (at least one source – The Washington Post – suggested that the down economy might be partially responsible for the reduction in drunk driving), it certainly looks like young men have a long way to go and might not be getting the education they need in terms of preventing drunk driving incidents, and binge drinkers might not be getting the help that they need to get better generally.

Having said that, I’m a big proponent of taking personal responsibility, getting off your duff, and doing something about it when there’s a problem – and when it comes to drinking and driving in the U.S., there is most definitely still a problem. To that end, I’ll share the CDC’s tips for individuals to help put the steel boot on the wheels of drinking of driving:

Do I take those seriously? Look at it this way – I often have to drive my daughter short distances within our neighborhood. I buckle us both up for those trips, and they only last about 90 seconds.

I’ll leave you with this bit of inspiration to help you think twice about getting behind the wheel in the future after you’ve been tying one on one, courtesy of quirky rocker-turned-wine-guy Les Claypool (who I very recently interviewed):

“Drunk driving is quite possibly the most selfish, irresponsible, asinine and dipsh*tty-ist thing that a human being could partake in. It is my opinion that a person who is responsible for harming any individual while driving intoxicated should be tied down whilst having their eyeballs sucked out by a randy male goat.”

In my home state of PA, DUI infractions can net you anywhere from 5 days to 5 years in jail, along with thousands of dollars in fines, but that might be small beer in relation to the knowledge of how much of a dipsh*t you were drinking and driving in the first place – and as for the randy goat suggestion by Les… well, that would be some fitting punishment!

Cheers – and stay safe (and responsible!) out there!

13 thoughts on “Drunk Driving Down. WAY Down. But Don’t Pop The Bubbly Just Yet!”