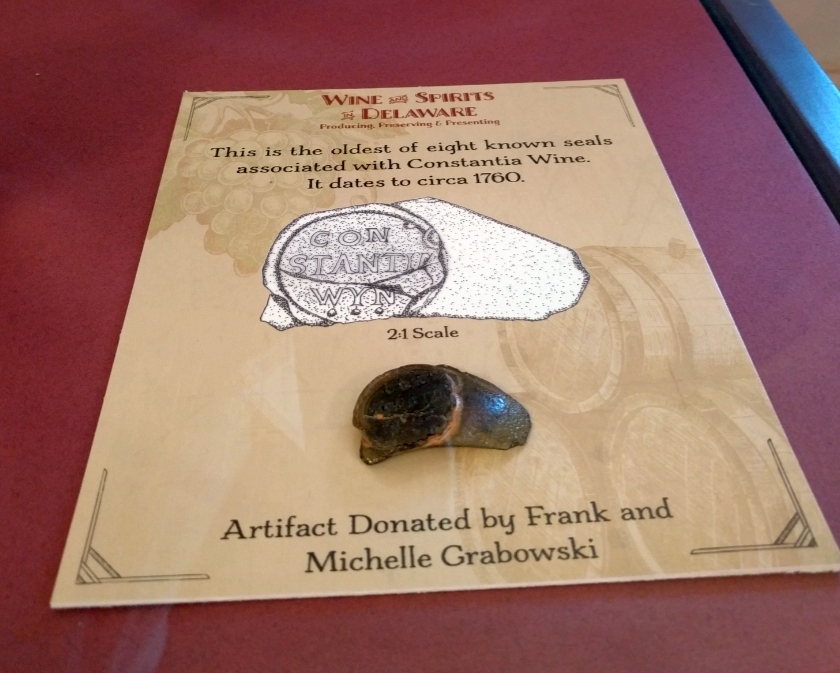 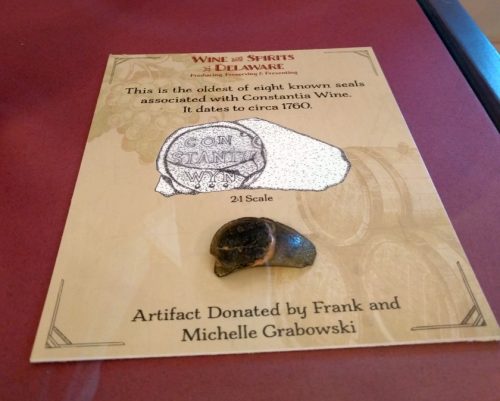 One of the wine world’s more interesting artifacts was found quite by accident. Off the shoreline of humble little Lewes, Delaware. Man, it feels really odd to write that.

I’m fortunate enough to be able to take an annual trek south to the Lewes area, courtesy of some of Earth’s Greatest Neighbors, who allow me to haul some of my family to their condo there during the Summer months. And it’s there (in Lewes, not in the condo) that said small but über-geeky wine artifact is on display, at the charming Zwaanendael Museum.

Zwaanendae’s focus is not wine, of course; it’s primarily the history of an ill-fated Dutch settlement, Swanendael, one of the first to such settlements to touch North American shores back in 1631 (they gave up on the spot not too much later, as the Native American population didn’t exactly receive the Dutch trespassers with open arms). Fortunately for us, it also focuses on displaying artifacts from nearby shipwrecks.

In 2004, dredging in the Roosevelt Inlet unearthed (and, ok, probably more or less destroyed) a shipwreck of a British merchant vessel loaded with international cargo bound for the then-colony of Philadelphia (the ship was almost undoubtedly British, given that it contained cargo from China, Europe, and South Africa, and all such legal commerce bound for the colonies had to go through Britain at the time).

Among the (literal) tidbits found from that wreck was a bottle fragment bearing the inscription “Constantia Wyn;” in other words, a seal of wine from South Africa’s Groot Constantia. As it turns out, the oldest such seal yet discovered…

When I saw it (see inset pic), my wine geek radar went spastic. Long-time 1WD readers will remember that I braved pretty severe back pain to visit Constantia back in 2013, and loved the wines, so it was a real treat to see this tiny piece of their history, dating back to the mid 1700s.

Think of its geek-worthiness this way: when this wine was meant to be enjoyed, it was likely the time of the Seven Years’ War and The Great Fire of Boston. 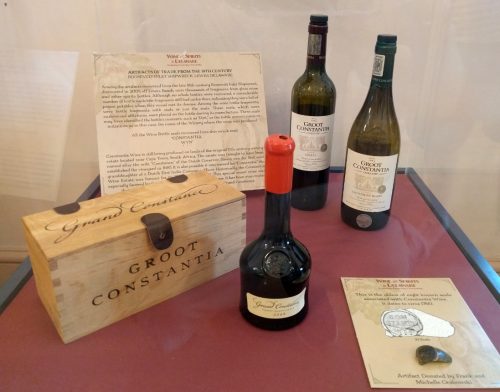 Anyway, in 2005, Constantia commemorated the discovery with a special release that reproduced the glass bottle style from which the seal fragment likely came – Grand Constance – for its dessert wine, which is made in very much the same manner as the nectar that was once in that ill-fated original bottle. The commemorative bottle shape is still in use (though you’re unlikely to find it in stock at any of the local Lewes, DE liquor stores, if my experience is any indication… not that I need yet another bottle of wine in my basement… ok, whatever…).

For more detail on the sweet wines of Constantia, check out my previous coverage here. Or, more to the point, go buy some and make your own determination of whether or not it really does rival good Tokaji (personally, I think that it comes very close).

Alrighty, then… back to my vacation…