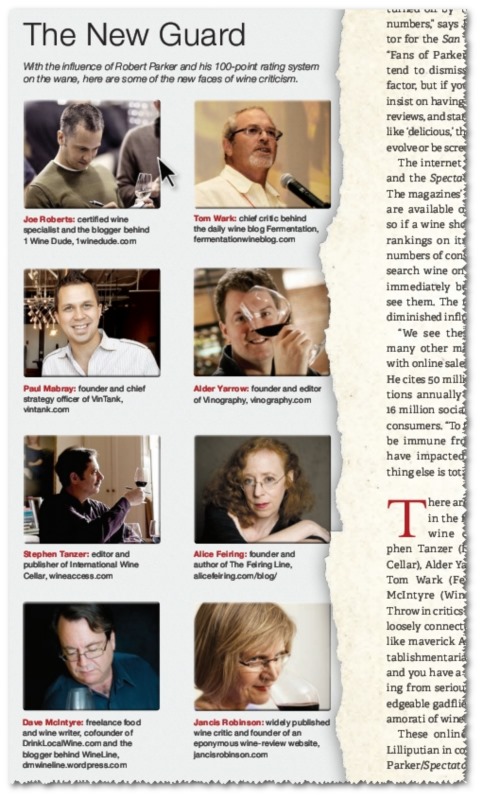 This is the kind of thing that probably gives major wine critics apoplexy. 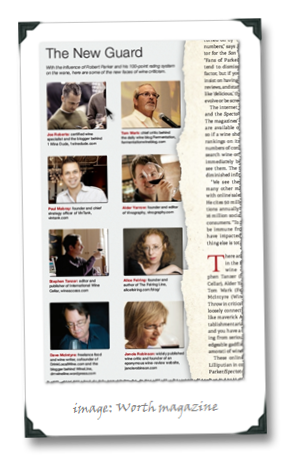 James Conaway, the talented writer and author of the excellent novel-with-a-wine-soaked-plot Nose, recently penned an article for Worth titled The War Over Wine. It’s cogent, well-conceived, deftly written and fiercely opinionated. In other words, it’s the kind of writing that fills borderline-hacks like me with a burning jealous rage hot enough to turn our faces the shade of a slightly aged Moulin-a-Vent.

Now, normally I don’t pat attention to Worth, mostly because I do not need reading material to fill my time below deck while my yacht is piloted to my own private dessert (whoops!) desert island. Just perusing the Worth.com website is like stumbling upon the remains of some lost civilization that used the same words we do to communicate, but put them in sequences that no longer have any meaning for us. It’s how Shakespeare appears to the high school student, or how Wine & Spirits appears to mortal wine drinkers, or how Umberto Eco appears to everyone who can read.

Seriously, topics can be found there such as Mutual Fund Strategies in the Aftermath of the 2008 Financial Crisis, the ever-popular Where Is the Best Opportunity in the High-End Luxury Space?, and my personal favorite, 10 Questions for Your Chief Innovation Officer (‘cuz I only had eight questions for mine, so I am clearly a 99-percenter slacker!)

Anyway… Conaway’s piece seems somewhat out of place in Worth in that context, but it’s the kind of article that makes me want to take up arms and shout from the rooftops, in the hope that it’s less a tempest-in-a-teapot and more a topical-sh*tstorm-about-to-explode (as The Tick might have shouted, “from the mighty butt checks of wine media justice!”)…

It’s a long piece, but the gist of it can be summed up, I think, in this quote (emphasis mine):

“Established wineries and critics once dismissed bloggers as anarchic and too diverse to move wine on a large scale. Not any more. The growing number of wine bloggers and their readers has resulted in a broad reassessment of how wine is presented to the increasingly sophisticated American wine drinker, for whom gold medals and one-to-100 rankings seem simplistic. And many of the most influential of these new critics don’t think much of the Parker/Spectator duopoly. Neither Parker nor the Spectator looked kindly upon winemakers who didn’t cotton to their style; some winemakers feel they were punished for years for making subtler, more classically structured wines suitable with food. Now the tide seems to be turning in their favor. Many younger drinkers focus not on points but on “context,” the particularity of a wine that includes agricultural, environmental and even social factors.”

I’m quoted in the piece, in which Conaway spirals through the rise of Robert Parker and the 100 point wine scoring system, the advent of Wine Spectator (the staff of which who, incidentally, continually hit my email address up with PR requests asking me to promote their events and press releases here), and the explosion of wine in the social media sphere.

For what it’s worth – and I think it’s worth quite a bit – Conaway seems to see wine blogging and the new diversity of critical wine voices as a necessary breath of fresh air for the wine industry. Which might not sound at first like it matters, but it does; wine sales numbers are huge, for starters, and for those who care about wine more deeply, that critical diversity is becoming a more proper reflection of the vast diversity now available in high quality fine wines. To wit, here is Conaway’s conclusion, which nicely ties up why all his article hubbub is worth it:

“Every state in the union now produces wine. Its growth as both a homegrown and imported commodity, whether cheap or luxurious, affects quality of life as surely as it does the health of businesses and households in some way dependent upon it. Thomas Jefferson’s vision of wine as the chosen beverage of Americans creeps closer, and today the individual finds the vast universe of wine most easily engaged and comprehended in the ether of the internet. Even at the high end, wine and those enterprises built around it shouldn’t be dependent upon a few critics or, for that matter, on a relatively few, potentially fickle buyers interested only in scores and attendant bragging rights. What many bottles need are many voices.”

There’s just a ton of potential argument-inducing implications throughout this thought-provoking piece: Conaway’s stance making it potential agenda-driven agitprop against mainstream wine media; wine producers growing tired of having to pay political fealty to yesterday’s critics; visions of the wine blogging world as a modern atavistic reflection of the way wine was covered in the days before the Wine Advocate and Wine Spectator. Take your pick, it’s all there!

Adding to the anecdotal evidence in support of Conaway being partially insane, he was kind enough to include me in his list of “The New Guard” of wine criticism (all people who have made a serious digital play in the wine sphere), which  includes the venerable Jancis Robinson (yeah, I know, she’s been at this wine thing for something like four decades, I don’t get why she’s “new,” either), local wine meme champion Dave McIntyre, tough-grader critic Stephen Tanzer, Vinography’s Alder Yarrow, Vintank’s Paul Mabray, PR guru Tom Wark,  and natural wine’s most vocal (and talented) proponent, Alice Feiring. And it’s just not a bad day when someone counts you in company like that.

Part of me suspects that the members of this new guard will have targets painted on our foreheads, in that the Wine Spectators of the world will come to completely hate us. Which for me could be a good thing, because it means they’ll stop PR-spamming me. But another part of me is thinking, and now we wait for the mainstream wine press to just completely ignore this story…

8 thoughts on “Did We Just Win A Battle In “The War Over Wine?””