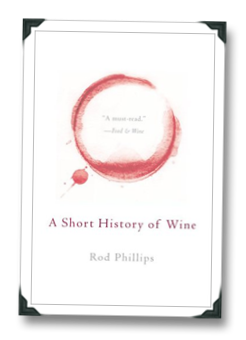 I find wine history fascinating.  This is because I’m a geek not only about wine, but also about history in general – a trait I picked up in undergrad when I roomed with two good-natured History majors at Saint Joseph’s University.  My undergrad studies centered on English Lit., and so the combination of overdosing on fiction and being subtly influenced by my roomies has led to, well, let’s just say several years of reading fascinating non-fiction.

No surprise then that Rod Phillps’ A Short History of Wine should be right up my alley.  And while it is a very good read – I’d certainly recommend the book to budding wine geeks – I’d caution that it doesn’t exactly jump out of the gate with intoxicating speed.

Like a young Barolo, Phillips’ book starts dryly and slowly.  In fact, it took me several months of starting, stopping and restarting it before I finally got into the rhythm of A Short History of Wine.  I’m pleased as syrah-spiked punch that I did stick with it, though, because it offers up a dizzying array of well-researched and fascinating wine facts (along with subtle notes of Phillips’ opinion) on nearly every page – that is, every page after wine hits its heyday (Medieval times) as a precursor to the beverage and industry that we now know and love.

I thought that I’d offer up a couple of the mythbusting tidbits that Phillips’ deftly provides in A Short History of Wine, both to tempt those budding History buffs out there  and to( hopefully) clear up misconceptions about a few assumptions that even experienced wine lovers tend to make about the history of their favorite beverage.

Francophiles be warned, I’m going to bust up some French-related wine myths first.  Also, if you’re French, note that the next few paragraphs involve both the Dutch and the English.  Try not to let your thousand years of mutual aggression get in the way of the enjoyment, ok?…

Romantic?  Yep.  True?  Well, saying that Dom Pierre Perignon (the Epernay winemaker at Hautvillers’ abbey in the late 1600s) invented the sparkling wine we now know as Champagne is a bit like saying that the first person to ever eat snails invented escargot, which is also to say it’s almost totally false.

The good Dom gave us many winemaking advances (including a precursor to organic winemaking), but he spent most of his time trying to find ways to keep his wine from undergoing the secondary bottle fermentation that gives Champagne its bubbles. An unintended consequence of low winter temperatures in Champagne temporarily halting fermentation (only for the dormant yeast to continue their fermentation work when things warmed backed up in the Spring), those bubbles were a serious occupational hazard for the Dom – they regularly exploded bottles of wine (remember that glass bottles then were not as sturdy as they are today), which in storage then exploded other bottles. Not only was it dangerous, it ate into the abbey’s store of usable vino.

Recent research shows that (to what will undoubtedly be greeted by chagrin from hard-core Francophiles) it might have been the English who first invented sparkling wine production, in terms of a controlled method to deliberately induce a secondary fermentation and give wine bubbles.  Yes, the English.  It’s not a typo. 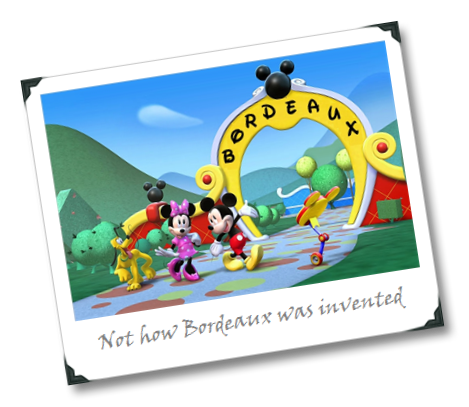 Not to pick on the French here (ok, maybe just a little), but I am often amazed at the assumptions that spring up around Bordeaux in general.  Budding oenophiles often act as if the famous Bordeaux chateau rose out of the ground like the Mickey Mouse Clubhouse, materializing instantly to create sublime wines from the magical spoken words of enlightened French vineyard landholders.

Wrong, Jack.  While the French have taken Bordeaux wine to new heights, much of what we now consider modern Bordeaux owes much of its development to the Dutch.

At about the same time that the Dom was trying to put a cork in his sparkling wine (both figuratively and literally) in Champagne, the Dutch had supplanted the English as the primary consumers of Bordeaux wines.  The Brits liked light reds (claret), but the Dutch preferred full-bodied reds and sweet whites – as long as both were strong.  The Dutch were among the first to identify that Sauternes, now legendary for its sweet white wines, was able to produce sweeter wines when their white grapes were left to hang into the Fall to maximize their sugar content.  And what promoted Sauternes to switch to white grapes in the first place?  Dutch consumer demand.

As for the red stalwart areas of today’s Left Bank Bordeaux reds – Graves and the Medoc – they were also products of Dutch ingenuity.  Along with their demand for wine, the Dutch brought land reclamation technology to Bordeaux, where they reclaimed marshy land along the banks of Bordeaux’s rivers.  That reclaimed land turned out to have alluvial soils, which makes for some kick-ass full-bodied red wine production. Voila, we have Bordeaux largely as we know it today.

So the next time that you enjoy a glass of Champagne with your sushi, or hefty Graves with your steak, or end the night with a little Sauternes, offer up a toast not only to the French but also to their Dutch customers.  And give a nod to Dom and Phillips while you’re at it.