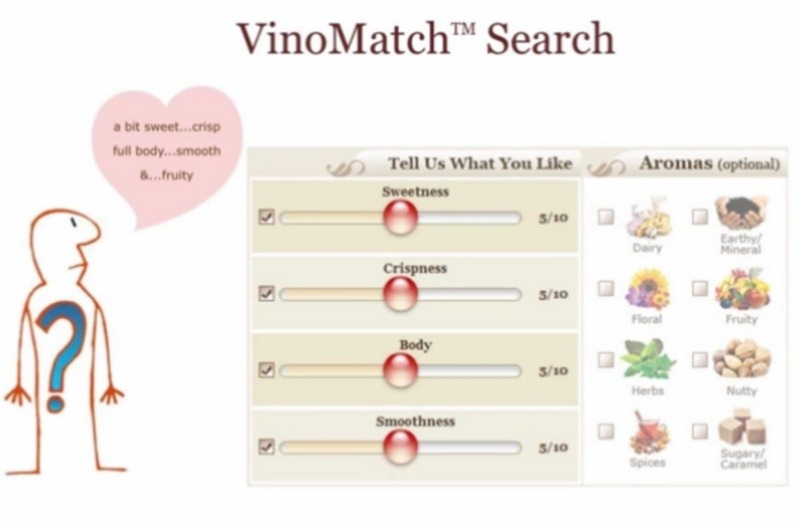 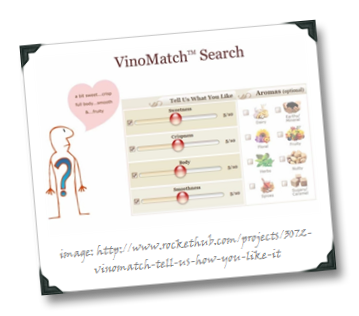 Fitting squarely into the “Well, Now This Is Interesting” Department (I just made that department up, because it’s my blog and I can do that sort of thing, after all), I recently received a PR-style email about a new wine search engine called VinoMatch.

VinoMatch is not an all-things-wine-related search engine (good thing, too, since it’s likely that nothing can compare to AbleGrape.com in that department – and no, that’s not a new official department here at 1WD, okay?).

No, what’s interesting is that VinoMatch is a search engine that’s meant to connect the average wine consumer with wines that they like based on flavor profile.  I.e., you navigate flavors and styles that you’re looking for, and VinoMatch presents you with wines that fit your criteria – theoretically linking you up with a wine you’re more likely to enjoy than a recommendation based on points from a small number of critics.

I love this idea, because I love the idea of people educating themselves about their own wine preferences and getting to the point where they can make comfortable wine-buying decisions on their own (sh*t, I wrote a short book entirely about how to do that!). But I don’t hold out a ton of hope for VinoMatch – at least, not just yet.

Why not? Well, the details behind answer to that question are even more interesting, I think…

It’s an answer that come in two parts:

Part the First: VinoMatch is looking for (modest) funding from The Crowd (i.e., the potential users of VinoMatch), and

Part the Second: VinoMatch thinks this tool will help turn casual wine drinkers into hard-core wine geeks; i.e., it will move them “up” the wine buying pyramid.

Each part of that answer has two Achilles-heel-style problems: 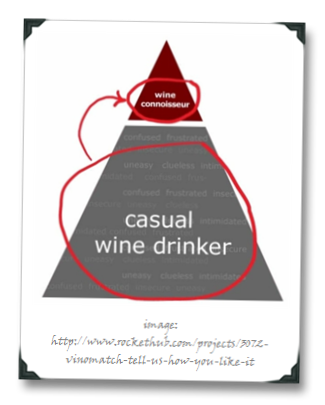 Achilles-heel-style problem the first: The Crowd is actually kinda cheap right now, mostly because it consists of the middle class, and the middle class is taking it squarely in the economic barrel bung hole right now. To wit: as of the time of this writing, VinoMatch have achieved just about 25% of their funding goal of $36,500, with less than 40 days remaining.

Achilles-heel-style problem the second:  The only person who has been able to move anybody up the wine buying pyramid was Gary Vaynerchuk (and in case you’re behind on current events, Gary isn’t day-to-day in the wine world anymore); for the most part, wine consumers near the bottom of the pyramid don’t really think about moving up (and there’s nothing wrong with that).

The requested thirty-six-and-one-half large will, according to VinoMatch, allow them to do the following for the platform:

Methinks they need a marketing pro, because those just aren’t sexy and compelling enough goals to make me want to part with my hard-earned shekels; and while we know that people want customized, democratic wine recommendations, we also know that they can get them for free from friends on various social media platforms.  I’m not sure this bodes well for VinoMatch in the long run.

It’s not that I don’t wish VinoMatch well – I do, and I hope that they blow past their funding goals and prove me totally and completely wrong here, because a well-executed version of their vision would kick some major ass as a mobile app, I think. But I wouldn’t be willing to bet any part of the farm on them winning this round, at least not based on how they’re playing it.

18 thoughts on “Crowdsourcing Taste Buds: Project VinoMatch Bets On The Democratized Wine World For Funding, But Is It A Winning Bet?”