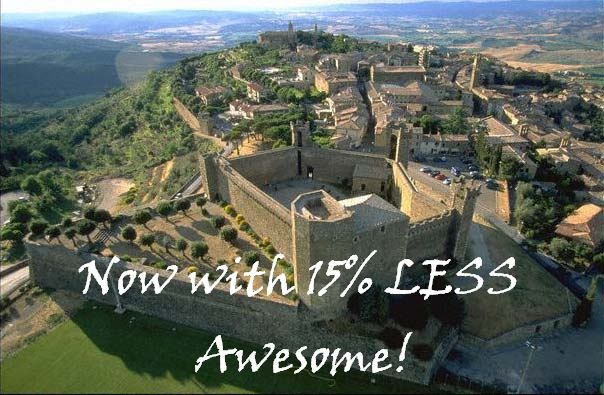 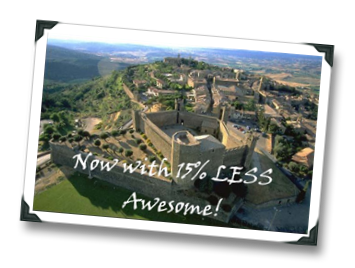 To make a long story short(ish), using a time-honored approach in which Italian regulatory bodies seem to liberally apply double-standards, the Consorzio’s plan to effectively water-down Rosso di Montalcino seems to undercut entirely their stated life’s purpose: “The work of the Consorzio consists in safeguarding, controlling and enhancing the value of the Denomination of Origin wines of Montalcino.”  My suggestion is that you flood their Inbox at info@consorziobrunellodimontalcino.it, tell them to pull their heads out of their… barrels… and make sure this proposal gets a NO vote.

Why am I upset about this, aside from loving Brunello enough that I named my dog after it?  Because this move is, as my grandmother would have said, the “lazy man’s load”…

Look, Brunello isn’t easy drinking even in its slightly more accessible Rosso form. So why not shake things up and make it even more acessible? Why not soften it up a bit?  Theoretically there’s nothing wrong with making Brunello more easy-drinking, but the problem I have is that the move to change Brunello regulations to do this is totally unnecessary.  They could simply use the designation of IGT Toscana for those types of blends and see how they fare in the marketplace.  That would protect a product unique in the wine world while also promoting progress and allowing producers to officially introduce other grape varieties in the region. That’s assuming the the Consorzio’s real aim is actually “safeguarding, controlling and enhancing the value of the Denomination of Origin wines of Montalcino” and not “finding a higher-priced outlet for a glut of non-Brunello grapes in the region,” that is.

Brunello Is “Winning!” – And Is Unique Enough That It Shouldn’t Be F*cked With

Brunello has found devoted wine geek fans worldwide for more than forty years.  And it’s not inexpensive stuff – even the Rossos aren’t exactly cheap and can often run over $20.  But… those fans don’t buy those wines to pop open a day later and then say, “damn, I wish these were easier to drink, but I still don’t mind paying $40 for ‘em!”  They buy them largely because of the fact that they are age-worthy wines, not despite the fact that they are age-worthy wines.  Normally I’m all for progress, and certainly would love to see many vitivultural regs in Europe shaken up a bit, but it’s not like the formula in the case of Montalcino is somehow all wrong.  These are big, burly wines, in the best case with unique expression of grape and place, and they are meant for people who are patient and want to drink… big, burly wines.  Why do I keep bringing up Brunello di Montalcino when the proposal is about changing Rosso di Montalcino?  Because…

Once Rosso di Monalcino gets changed, Brunello di Montalcino (also currently 100% Brunello by regulation) will almost surely follow, and thus similarly get watered-down – in fact, the Rosso idea might have been born from a previous, similar idea to change the regs for Brunello itself. Recently, Jancis Robinson summed up the situation nicely on her website:

“Critics defending the genuine expression of terroir, which, according to them can be transmitted only by a pure Brunello wine, are extremely concerned that this vote could also effectively provide a back door for the original idea to change the regulations for Brunello itself.”

Should this change to Rosso di Montalcino be approved? Clearly my take aligns with Jancis’s, and is a resounding “NO”… and if you’re of the same mind, I hope that you will tell the Consorzio to shove the proposal!