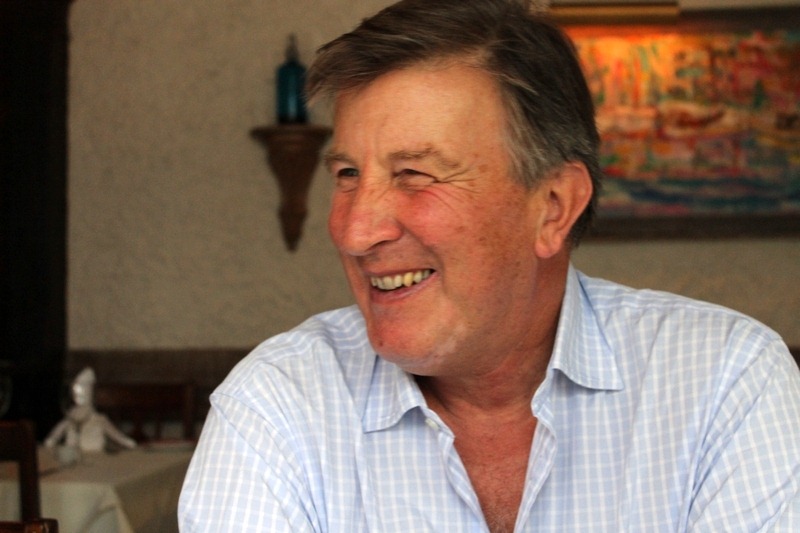 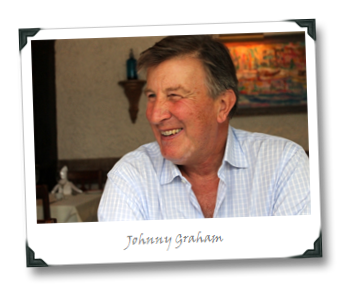 “You can beat the sh*t out of something, and all you get is powdered sh*t!”
– Johnny Graham

As part of some prep work for recently-published Playboy Port Primer (For Your Holiday Port-ing Pleasure), in November I was a guest of importer Frederick Wildman for a lunch/tasting and dinner/tasting with Johnny Graham, the force behind relative Port newcomer Churchill’s.

The F-W folks didn’t actually know that I was sort-of on assignment for my Port Primer, but it turned out that Johnny Graham – to whom I now owe a return on a much-needed pre-dinner beer that he bought me en route to the evening event – had so much Port worth talking about that I wanted to highlight him here. I think I also owe him a beer for providing the above quote, which slipped out when we were tasting through some of the Churchill’s lineup at F-W headquarters before our dinner, while we were discussing wines that exude finesse as well as natural concentration, versus those that simply display an overly-extracted sense of concentration (for an example of the former, try Churchill’s elegantly understated Ten Year Tawny Port, which I likened to Sancerre – seriously – in terms of its prettiness). 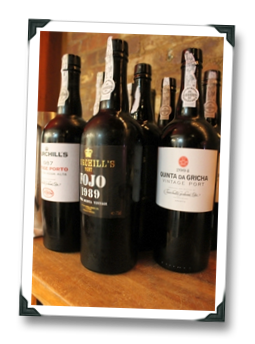 Anyway, the highlight of the visit was a trip to NYC’s Hearth restaurant, where I finally got to see/taste what all the (well-deserved) fuss was about when it comes to Paul Grieco (and his massive soul patch), who did an admirable job pairing an entire multi-course meal to vintage Port selections from Churchill’s (not an easy feat, even if the wines are quite good, since they’re also quite demanding, and in some cases quite sweet – in short, a culinary mine field).

Graham’s family Port biz started in the 1800s, and he told me that he was “fortunate, in my youth, I was able to taste vintages like the 1908s; Vintage Port can age 20, 50 years or more, and there just aren’t many wines that can do that.” To that end, given the sh*tload of non-sh*tty wines we tasted that evening, I hope you’ll forgive me the  list-and-review style format post, but I thought it worthwhile to give you the scoop on several past vintages of Churchill’s Vintages… including a sneak-peak at the yet-to-be-released 2011…

To make this a bit easier to digest, I’ll run through these in order of vintage (and NOT order in which they were digested with each course at Hearth, etc.). Badges will be awarded only to the most-recent releases, but you should be able to find most of these Vintages if you look hard enough. 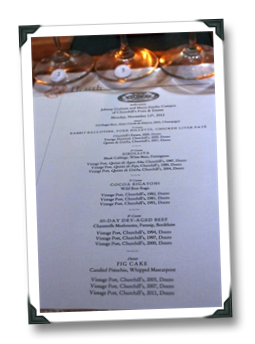 If you like your VPs with dried fruit (I don’t), then this is your wine. Dates, raisins, rum-like heat; spices, too, but generally lacking that vibrant streak that (as you will shortly read) is a hallmark of later Churchill’s VPs. “I should be forgiven,” Graham added when we tasted this at dinner, “it was our first one!”

Graham recovered quickly, and with a vengeance, from the so-so `82. I am here today to tell you (and warn you) that I am in near-complete disagreement with nearly very other critic on this wine, which I’ll admit has me a tad concerned but I’m sticking with the rating, because this was far and away the best wine poured on the tables at Hearth that November evening. Resin, rum raisin, eucalyptus, green tea, mint, blackberry, blueberry, toast, spices, figs, a ton of pepper, and… goose-bumps. It’s rich, but all in check with a racy freshness, like it’s got high-tension wire electricity charging through it. I found it stunning, and after this wine I “got” what Churchill’s style is all about.

From a north bank property, and a warmer one than the rest of the Churchill sites. This was a bit subdued, but broad and rich and fruity. Fig, plums, raisin, blackberry; its bold and peppery, chocolaty and big, and earthier than most Ports you might run into. Proceed with caution. 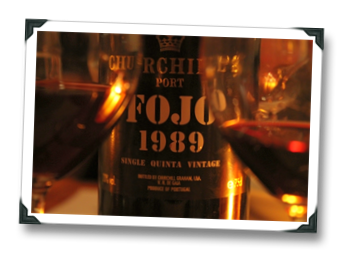 In the words of Kool and The Gang: FRESH! The blueberries and blackberries are so inviting, you’d be forgiven for wanting to pour this over pancakes (but admonished if you actually do that instead of drinking it). Caramel, spice, chocolate, dates, clay-like earthiness, herbs and rum all take some turns in here, too; it’s a bold style, and a nice style, and the juicy/spicy finish is signing a tune that is far from a swan song.

Tight-lipped at the moment. But… also earthy and fresh, with a classic, rich Ruby-style palate. The finish reveals a bit more, and even gets nutty towards the end of its long ride. I’d love more spice, personally, but the freshness of the fruit makes up for any wanting elements here. Also, you can find it for under $90, which isn’t too bad for a wine that can clearly age another decade (or two).

A bit disappointing given the storied vintage and the price, but only *just* a bit. Smoky, earthy, with fresh berry fruits (some of them red rather than blue and black) and hints of resin, and even some meat (yes, seriously). Complex, and gets darker and more raisined the further it goes on the palate. The finish is ridiculously long on this wine, and has straight-jacket craze amounts of complexity. I was hoping, given the rest of the lineup, for a bit more vibrancy, but fans of the big-and-complex will be more than a little happy here.

The fruit is dark, the notes are a bit oxidative, nuttier, chocolaty & minty. This is a wine that’s reminiscent of a good Tawny, and so has probably seen its better days already. I gave it the nickname “old man” during dinner. Only I laughed. No one really understand me… 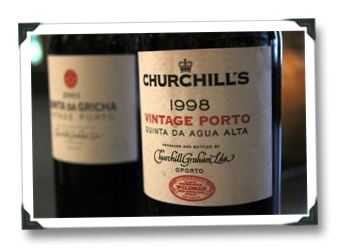 Tasted one-on-one with Johnny Graham prior to dinner. I dug the combo of dried (spicy, leathery, figgy) and fresher fruit (red cherry, plums) on this. The wood spices are so well integrated now, too, which works with the richness of the entire package. Not a subtle wine, however.

If you like ‘em dark as night, this is your Goth rave Port. It’s all dark fig and dates to start, but gets spicy and fresh and a little more “red” on the palate (but just a *little*). Overall, a solid package and a firm stance of a wine, marred only by a nice peppery finish that’s too ‘clipped off’ at the end.

Not going to win over purists, but I dug the eccentric attitude of this Port. Resinous, with eucalyptus, and wild, very concentrated berry fruit. Spiced rum, raisins, tea, heat, and something animal all come together here at some point, too. On the palate, it’s rich, broad and spicy, with good freshness. It’s a bit like Churchill’s difficult to understand, but clearly talented art house project Port.

Meaty, spicy, fresh and rich. Prunes, figs, dates, and comes off almost dry on the nose… but get it into your mouth… and the vibrancy meter just gets pegged, when the  red berry fruits and vivacity show up in full force. A tad hot, but downright electric and one that disappeared quickly at dinner.

At first, I wasn’t keen on this as the aromatics were so… distant. But given time… and given its amazing mouthfeel… it showed its true kick-ass nature and proved my personal fave of the Gricha offerings. Both fresh and dried berry fruits (both very concentrated), pepper and a ton of spices, all supported by great structure and good length. 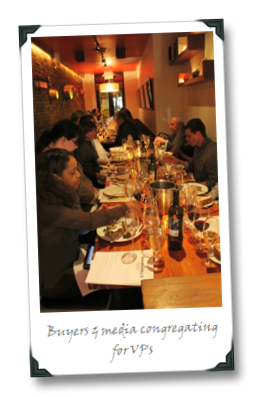 Another one tasted one-on-one with Johnny. Only 500 cases were bottled of this powerful beauty, “really just to have a library stock” as Graham told me. This wine is very, very, very young. Wild berries, raisins, spice, and a touch of stewed plums. I really dug the natural concentration on this, and despite the drier fruits there is a line of freshness cutting right through everything here like a razor. Finally, you get a spicy, woody, dried fruit finish that is long enough that it might be able to predict your future.

Tasted one-on-one with Johnny. Generous, complex, and “broad shouldered” as Graham likes to describe it. It’s not a lumbering beast, though, by any stretch. Those blackberries, raisins and figs are supported by as much brains (acid) as brawn (tannin). It’s a dialed-up wine from a dialed-up vintage, toasty and chocolaty and just a baby right now. “It will be a good looking wine when it’s older,” Graham remarked, “it’s got the right… bone structure.” Three thousand cases were made. Go find one.

To say that Johnny Graham is excited about the 2011 vintage is like saying that the cocoa rigatoni with wild boar ragu at Paul Grieco’s Hearth was “kinda interesting.” Here’s Johnny’s take: “At this stage, the 2011 is head and shoulders above any other vintage I’ve produced – and I’ve been doing this for forty years.” Only, you have to draw out “yeeeeaaaaars” with a British accent to get the full gravitas. The sneak peak we got of the 2011 is certainly very, very promising: chocolate, black and blue berry fruit, fig, vanilla. There’s an elegant combo of freshness, structure (a healthy amount of grip is the undertow of this Port) and vibrancy of fruit that is pretty special here. The pepper notes and vivacity actually reminded me of Cru Beaujolais, which sounds odd but I’ve already compared a Tawny Port to Sancerre, so f*ck it, we’re going with that. Anyway – this is certainly one to watch, and has me excited for the 2011s in general.