So mentioned Alessandro Fiore – who, along with brother Claudio, oversee wine production of Castelluccio, one of their family’s three winery operations – recognizes the oddly ironic state of Romagna wine.

On the one hand, by most measures this hilly, picturesque northen-Italian area near Bolgna is synonymous with what we in the USA consider to be Italian food. Romagna is the birthplace of Parmigiano Reggiano, balsamic vinegar, lasagne, tagliatelle, tortellini, and prosciutto. On the other hand, Romagna is not synonymous with fine Italian wine, having spent decades churning out juice for the bulk market.

But there are several smaller Romagna wine producers who are engaged in fighting the good fight to elevate the region’s craft, including Modigliana’s Castelluccio, nestled in what the Fiore brothers call “ancient Tuscany” (where I visited on a press jaunt back in November). While they might look more like members of early Jethro Tull, the Fiore brothers know that the struggle for Romagna wine recognition is very, very real. Their father, Vittorio Fiore, acquired the majority of their fourteen Romagna hectares of land over several years, and has been focused on quality wine production from their marl and limestone soils since the 1970s. They made a splash early on by producing a regional Sauvignon Blanc (“which at first was not very good” remarked Alessandro) in an area better known for Sangiovese…

That Romagna could produce excellent wine shouldn’t be all that surprising (and with the Fiores, I tasted several, including their neighbor Torre San Martino’s stellar ‘Vigna 1922’ Sangiovese Riserva), given that the Adriatic is a mere 30 kilometers away (leading Alessandro to mention that “the hill is always kissed by the sea breeze,” which you’ll have to imagine spoken in a lyrical Italian accent). Fresh, cold air from the Alps also influences the growing area, and the result is, according to the Fiore bros., “more elegance, finesse, and more bouquet” in their Sangio than can be found in the African-climate-influenced grapes grown further south in Tuscany.

This pair of Castelluccio sippers are making an especially good case for Romagna’s Sangiovese good fight:

The Fiores have been making the all-stainless-steel Le More since the early 1990s. This is lovely, lively stuff, with juicy red plum flavors, bright berry aromas tinged with herbs, and enough vibrancy to light up a dark room. Having said that, it also has juuuuuust enough hint of structure to make you want to immediately start cooking burgers on the grill. 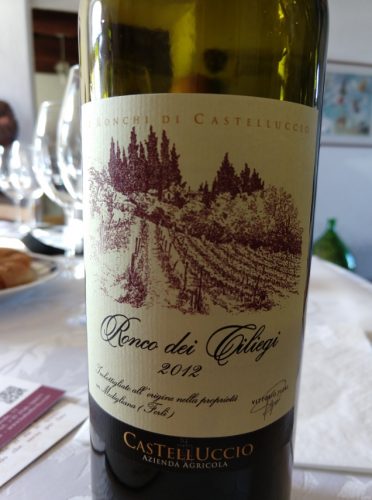 This is single-vineyard, 100% Sangiovese that’s aged in 350 liter French Oak tonneau for a year, then in bottle for nearly another year. Older vines are used, and it’s considered one of the first “Super Romagna” Sangios, having first been released in the 1980s. Fresh, juicy, spicy, and lifted, there are plums of nearly every stripe evoked here, along with wood spices, leather, graphite, orange peel, and finish that is both quite long and very, very elegant. If a wine like this doesn’t punch you in the head with the realization that the Romagna fine wine Sangiovese fight is worth fighting, then you probably ought to be literally punched in the head…