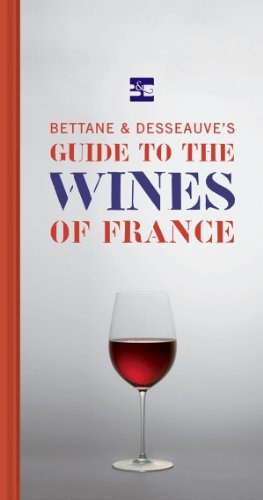 Too much of a good thing, can, in fact, be had, especially when you’re talking about wine books; the sight alone of which used to bring me great pleasure but now fills me with a OMG-I’ve-got-term-paper-due-soon type of dread because I’ve not so much as glance at most of them let alone reviewed them. 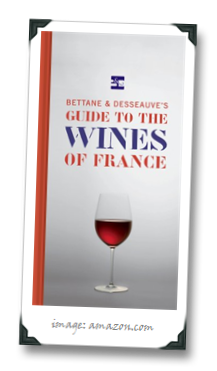 First off, wine books tend to be weighty – as in, literally weighty, heavy, and requiring a lot of storage space. In the case of my current stock of wine book samples, they are taking up an increasingly alarming percentage of my office floor space, as they sit in grim admonition of my incapability to keep up even a modest a review schedule… MOCKING ME WITH THEIR SILENCE!!!

Anyway… I’ve been making a (half-hearted but) concerted effort to chip away at the wine book sample library that has now grown out of my floor space, and so picked up the nearest to my desk chair, which happened to be Bettane and Desseauve’s Guide to the Wines of France By Michel Bettane and Thierry Desseauve (about $25 at Amazon.com).

Michel Bettane, France’s most recognizable wine critic, is (I’d argue, anyway) prone to pontification (something I noted when hearing him speak last year in Cahors). He lives up to that  reputation in this new guide – which in-and-of-itself is a capable, handy abd well-researched reference on a wide swath of French wine.  It’s in the guide’s Frequently Asked Questions section that the pontification is on display, when the authors directly address the question, “Can a wine critic’s opinion really be trusted?”

In this case, Bettane and Desseauve’s Guide to the Wines of France is not just weighty in heft, but also in tone; and the answer it offers to that potentially deep query is alternatively defensive, poignant, and downright… odd…

Bettane and Desseauve (though I suspect mostly Bettane) begin by going on the defensive, acknowledging that the role of the critic has come under attack in recent years (all emphasis is mine):

“…They see us as members of an old-boy network, incapable of delivering fair and impartial advice. Some even question our professional competence and the very criteria that form the basis of our opinions… We are not handsomely paid for what we do, not in France at least…”

Hard to argue with them; I don’t know any wine critics who are raking in the cash in any currency, and there’s been no shortage of barbs thrown the way of critics in an age when the voice of the amateur can be heard louder (and carries much, much farther) than in any other time in history.  Typically, when a professional is faced with explaining the value one brings at a professional level, said pro starts talking about said professionalism, in terms of distancing his/her role from that of an amateur on the basis of experience – which is precisely what Bettane and Desseauve go on to do:

“As for our views about wine, we are surely better placed to give advice than consumers themselves in wine chat rooms. To begin with, we have the advantage that comes from seeing thousands of different wines develop over a huge number of vintages. In particular, we have a much clearer idea of how wines are made, varying in style from one winemaker to another, according to local traditions and available technology.”

Also tough to argue with that logic. Ever read Outliers? Bottom line: nothing makes you an expert at something like experience, and the pro in almost every case will have an edge on the amateur in that regard if only by virtue of volume of exposure.  Now, you might take umbrage at their inclusion of wine chat rooms (and by extension just about any on-line forum, blogs, etc.), but while it can be argued that there are some experienced non-pros in those forums, it can be also argued with equal merit that the majority of people in those forums don’t have the time (or funds) to taste the volume of wines that the pros do.

So far, so good; but things take a decidedly odd turn after that:

“Most of all, we are more even-handed when it comes to assessing wines: in the course of our work, it would be unthinkable to judge the work of so many producers and not become friends with a few of them. This is precisely why we are less likely to show favoritism than all those wine enthusiasts who pride themselves on their particular choice of supplier.”

Let me get this straight: consumers/amateurs pride themselves on buying the wine from a few brands/outlets, and this makes them less objective in their analysis of wine? And befriending wine producers makes pros more impartial?  None of that makes any sense whatsoever.

Speaking for myself, and I suppose I sit somewhere between the amateur and professional here, my friendships with wine producers causes me a sh*tload of agita, because it makes me worry that I’ll be prone less impartiality when evaluating their wines, not more.

As for consumers priding themselves on limiting their wine purchases to a few select suppliers or brands, Bettane and Desseauve must not have seen any of the data from the last few years on the fickle Millennial generation’s wine purchasing habits – they don’t really build limited brand loyalty, they try just about anything and everything. And I’m pretty sure that stance wouldn’t qualify them as biased zealots incapable of objectively discerning the merits of wines from multiple producers.

The big question from passionate wine consumers back to the authors, I think, ought to be Why even go there? We’re talking about two guys here who don’t really need to defend their position as critics in the first place, and if they feel so compelled to answer a charge against their utility, why not leave it at “we taste a sh*tload of wine and have garnered the experience.” Why take pot-shots at the wine geek consumers of the world? Those are your core customers, guys!

I’d be remiss in all of this cavil-mongering, however, if I ignored the more poignant part of the authors’ answer:

“The fact that we are impartial, however – and the evidence does seem compelling – certainly doesn’t mean that we are infallible. Let me say it loud and clear then: even wine critics can get it wrong! This is why we taste wines throughout their lives, from the cask right through to old age; why we scour the vineyards and wineries; and why we ply producers with questions.”

Wine critics do, indeed, get it wrong.  Sometimes, they even get it wrong a few sentences before telling us that they can get it wrong.  Why the fact that wine critics are fallible should be surprising news is beyond me, but they deserve props for mentioning it.  Bettane and Desseauve also deserve credit for reminding us (in multiple places in Guide to the Wines of France) that the subject matter of wine is not a destination, it’s a journey; and wine expertise is not a finish line that remains stagnant, it’s an ever-moving target.   That fact might sometimes generate Sisyphus-ian levels of frustration for wine geeks, but it’s also responsible for much of what makes wine artful and soulful – if not for an eternally-moving mark, we’d have a much less exciting wine world about which to pontificate.

9 thoughts on “Can A Wine Critic’s Opinion Really Be Trusted? (Dissecting the Pontifications of Bettane & Desseauve’s Guide to the Wines of France)”