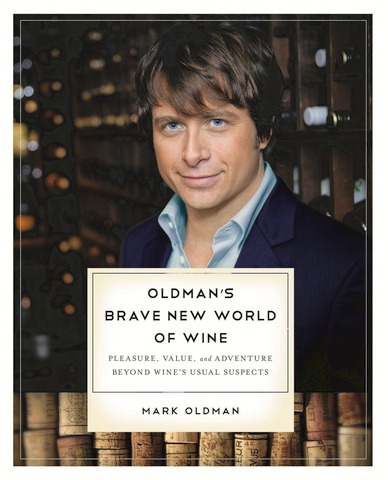 I like wine (duh).  I also favor, and am often drawn to, personalities that are high-energy, engaging or highly-knowledgeable about their fields of expertise. 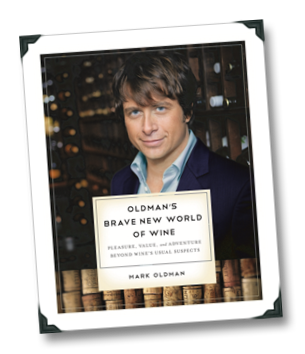 No surprise, then, that I consider Mark Oldman one of the most dynamic – and one of the best – wine educators in the world, since he’s got it going on all three fronts.

Most folks out there will recognize Mark’s face as the lead judge from the PBS reality-tv series The Winemakers, or will recall his name as the guy who makes the wine picks for the 15+ million readers of Everyday with Rachael Ray magazine.  But I recognize Mark as the guy who wrote the beginner’s wine book that I’ve recommended more than any other wine publication – Oldman’s Guide To Outsmarting Wine.  My standard line about Mark’s first book for years has been, "this is the one to try first for anyone beginning to get ‘into’ wine; it’s the book I wish I’d had at my side when I was first starting out as a wine buff."  In other words, I thought it was an instance classic.

Outsmarting is still largely unmatched for its combination of verve, intelligence and accessibility – a lot like Mark himself, as you’ll quickly learn from our interview below.  Mark has a new book on the shelves (I received a review copy) – Oldman’s Brave New World of Wine – and it’s geared towards the Intermediate stage of one’s vinous journey.  In the pages of Brave New World of Wine, Mark offers up wine recommendations slightly off the beaten path, meant to expand your wine knowledge and delight without expending your bank account.  For the most part, the new book is another stellar achievement for Mark, and more often than not I found myself nodding along with his recommendations and witty-but-wise takes on lesser-known varieties (turns out we’re both nuts for Nero d’Avola, ravenous for Rosé, and on a tear for Torrontés).

Mark took some time out of his busy book tour schedule to answer a few questions about his new book, the next season of The Winemakers, and how he got started inthe wine biz.  Turns out that Mark also shares my affinity for the music of a certain long-standing Canadian power rock trio (as if I needed more reasons to like the guy at this point).

Before this intro. turns into another version of "I Love You, Man," I’ll turn it over to the interview…

1WineDude : OK, I’ve got to ask this first: you’re getting front-row seats to RUSH concerts in N.J. and hanging out with Alex Lifeson and Geddy Lee?  How does that go down?  That’s so awesomely beyond awesome that "awesome" doesn’t describe its awesomeness…

Mark Oldman: That show was electrifying – both for the audience and, it seemed, for the band.  Rush is shredding it better than ever and experiencing more love than ever before.  Last year I had the opportunity to interview Alex in his wine cellar, so stay tuned for a fun video of that launching on my site in a few weeks.

1WD: On a more serious note, you’ve included quotes from oscar-winners, rock stars, celebrated chefs and TV food stars in Oldman’s Brave New World of Wine.  How did you manage to pry all that vinous wisdom and those witty anecdotes from such a diverse group?  Do you just know everybody on the planet?

MO: There’s an invisible fraternity of grape nuts out there – including the luminaries quoted in my book – my so-called “Bravehearts”.  I think that there’s much inspiration to be gained from hearing about the vinous preferences of those you admire.  My Bravehearts’ insights are meant to provoke and stimulate the reader’s appetite for experimentation.   Sammy Hagar, by the way, really knows his vino – as does Julio Iglesias, Zac Posen, John Lithgow, and many other notables who aren’t necessarily famous for their vinous passion.

1WD: I think it’s not even fifty pages into the new book and you’re throwing out Moschofilero and Txakoli recommendations, and I’m reading this and thinking "Holy sh*t! That’s awesome!"  Were you sweating it at all going that obscure (relatively speaking) so early in the book?  Were the W.W. Norton guys like "Uhm… Mark… we need to… talk…?"

MO: My editor Amy Cherry is the Platonic ideal of a nurturing editor – a fount of sage advice who trusted me to focus on less-familiar wines but not ones that are unattainable.  My goal was to offer readers adventure but accessibility–nothing too obvious, nothing too obscure.

1WD: Oldman’s Brave New World of Wine seems to heavily favor wines made from lesser-known varieties, to help readers find bargains that expand their wine knowledge and enjoyment. From all of the various examples presented in the book, do you have one or two that really stand out as favorites for you right now?  (I’ve been on some serious Nero d’Avola and Alvarinho kicks lately myself…)

MO: Among the whites, Torrontés from Argentina is a Brave New Pour of maximal pleasure and minimal cost.  Its ambrosial aromatics are counterbalanced by a tangy taste as refreshing as lemonade.
Portuguese reds are emerging as a major source of bottle-borne joy.  Portugal’s Douro and Dao regions in particular are producing reds of richness and personality at a fair price.  They are usually full-bodied, plummy, and smoky – not unlike a Cabernet or Syrah – but often with a certain earthy distinctiveness.

1WD: Tell us about your experience on the reality TV show The Winemakers.  I’d always had the impression, from everything that I’d seen/read/heard about you, that you were a high-energy and affable guy.  And then seeing your performance as the lead judge on The Winemakers, I was thinking "damn, this guy’s a hard-ass!"  Lettie Teague came off the same way (which is of course totally different than the buzzing and bubbling personality you encounter when you meet her).  Did you have to get "into character" for your role as a judge on the show?

MO: There’s a game face that comes with assuming the role of television judge.  My normal gear is indeed affability, but during the “Crossfire” episode someone needed to step up with a bit more steeliness.  Being a New Yorker, it wasn’t difficult to channel my inner-Simon.

1WD: Your chapter on Rosé in the new book really struck a chord with me (personally, I’m really sick of Rosé getting dissed).  Why do you think Rosé gets such short shrift in the U.S. market?  Or should we actually be thankful for that since it means those of s who really dig it can still get it cheap?

MO: As I say in the book, rosé is guilty not by association, but by pigmentation. Its very pinkness gets it in trouble with casual drinkers, who sometimes dismiss it as the stuff of clown cars, cotton candy, or Rush Limbaugh’s ties.  This is unfortunate, as good dry rose offers not the sucrose serum of a bad white Zinfandel, but a dry, clean thirst-slaker with the body of a light red and the crispness of a white.

1WD: The thing that stood out for me most about Oldman’s Brave New World of Wine was that it’s geared towards "Intermediate" wine lovers – those that aren’t totally new to wine, want to bracnh out and learn and experiment, but aren’t exactly looking to enroll in Master Sommelier classes, either.  It’s the target audience for 1WineDude.com, because when I was an Intermediate guy I was shocked that there were so few resources available vs. the one billion wine intro books and the massive (and massively expensive!) wine references tomes for the hard-core wine geeks and pros.  Did you have those people in mind when you were writing the book (and what are your thoughts on how those Intermediate folks can start to become Experts)?

MO: You hit it. I focused my attention beyond the usual suspects of wine but without delving into the geographical, geological, and historical expositions that send me to snooze.  My driving principle is that if people are going to take the time to read my prose, I will labor to make it as entertaining and useful as possible.

When I write, I’m always mindful of the 95% of the drinking public who still frets that they “knows nothing about wine”. Oldman’s Brave New World of Wine, then, is intended to help novices take advantage of our burgeoning universe of wine choice.  The chapters, taken together, are meant to provide easy on-ramps into this world, furnishing just enough information for beginners to start to identify new styles that suit their tastes.

For those with intermediate knowledge, this book is designed to provide more bullets for their vinous holster, illuminating new and reborn regions as well as fresh twists on certain classics.  Most wine lovers I know tend to limit themselves to just a handful of regions or grapes that they happened to encounter early in their wine journeys.

For wine professionals and other experts, the book is designed to fill in the gaps, reinforce the newly learned, and choose among a constellation of worthy wine types.  Even the most adventurous and knowledgeable aficionados have to work at staying abreast of the latest and greatest.

1WD: I get asked this question quite a bit, but I hardly ever ask it of others unless I think the answer will be interesting (no pressure!): how and why did you get "into" wine, and what drove you to become a wine resource for others?

MO: It all trails back to college in 1990, when I started a club called the Stanford Wine Circle whose mission was to host wine tastings with top winemakers.  After organizing dozens of these visits and then graduating, I gained the confidence to create my own wine courses at a wine bar in New York’s Soho neighborhood.  For fun I did that for many years, until my students coaxed me to “put this stuff in a book,” which led to my first wine book, Oldman’s Guide to Outsmarting Wine (Penguin), in 2004.   Before focusing fully on wine, I was co-founder and president of Vault.com, the career portal for job seekers.  The common thread running through both Vault and my work with wine is my deep interest in providing consumers with innovative and carefully researched information.

1WD: What will it cost me to get you to convince Alex and/or Geddy to do an interview here?  I’ve only mentioned RUSH about six thousand times on this blog, you’d figure their publicists would be paying me for advertising by now…

MO: A case of La Tache would be a good start!

1WD: What’s next for you?  What should we be looking out for from Mark Oldman in the months ahead?

MO: I’ll be appearing at the Food Network New York Wine and Food Festival, teaching the “Heaven Sent” seminar on foie gras with the owner of Hudson Valley Foie Gras.  I’m also doing a “Bold Flavors, Brave Tastes” seminar with Harold Dieterle, the restaurateur and first Top Chef winner.  And the book tour continues – nine cities down, six more to go.  A few weeks later, we’re resuming the filming of season two of PBS’s  “Winemakers” in the Rhone Valley.  Hopefully I won’t need to channel my inner-Simon too frequently!