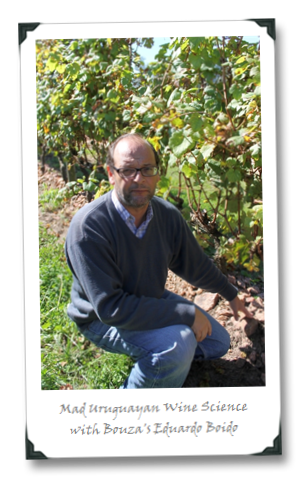 Bouza Winery is small even by Uruguay’s petite wine production standards. 25 hectares of vineyards spread out between two plantings, in the Melilla and Las Violetas regions near Montevideo, yielding about 120 thousand bottles a year. But you wouldn’t know it tasting their wines, which are bold, modernly stylized (okay, and in a few cases too modernly stylized on the aggressive oak treatment), and bigger than some of California’s heftiest reds.

But while you might justifiably dismiss Bouza’s in floral, plummy and spicy experimental 2011 single-parcel “A6 ” Tannat as being too, well, boozy, you’ve got to admire the gumption undertaken in trying to bring it to life. The vines are trained low to the ground, a ground covered with local stones red stones brought in specifically because their wavelength provides maximum light reflection, the better to ripen up that tricky Tannat with less need for leaf thinning and with fewer of that grape’s often punishing tannins.

Bouza has a bit of a secret weapon, and it’s not Pincho, their local male capybara who is friendly and fond of having his rough fur petted (by the way, capybaras purr when they’re happy; who knew!??). No, the secret weapon isn’t a dog-sized rodent that acts like a cat (although that admittedly is very cool), or the fact that Bouza’s renovated 1940s-era property and excellent restaurant have them set up better for receiving tourists than just about any other winemaking outfit in Uruguay. [ Editor’s note: as far as I’m aware, Pincho is a relatively rare case among capybaras, who are pensive in the wild; do NOT get hosed on Bouza wine and the go to the zoo trying to pet one, unless you want to possibly lose your hand! ]

The weapon is mild-mannered, be-speckled and willy-haired former physics teacher and chemical engineering PhD Eduardo Boido; the kind of head winemaker whose doctoral thesis centered on oenology, and just the kind of guy that you’d expect to think up an idea like trucking in wavelength reflective-wavelength red rocks and dumping them in an experimental vineyard… 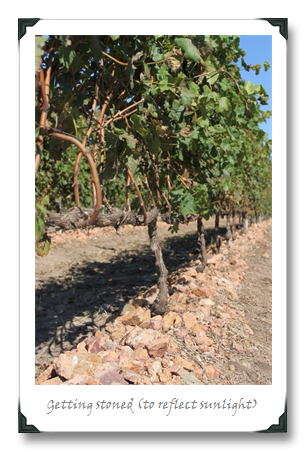 The traditional exterior at Bouza belies the mad scientist’s winemaking layer within  its walls. Owned by former frozen food magnates, the brand has been in operation since 1998, purchasing the winery, renovating and expanding it in the early 2000s. Unlike much of Uruguay’s older plantings, Bouza’s thirty + year old vines are mostly trained using vertical shoot positioning rather than lyra, a system that roughly doubles vine production, and that more than one Uruguayan vigneron – a lot more –  told me creates a near-constant struggle between managing vigour and grape quality (as one winemaker in particular put it, “lyra is bullshit!”). Perched over some of those modernly-trained vines thoroughly is a thoroughly more traditional method of augmenting their pest management: small owls, which I can report from personal experience do not take nearly as kindly to visitors coming close to take their photo as our buddy Pincho. 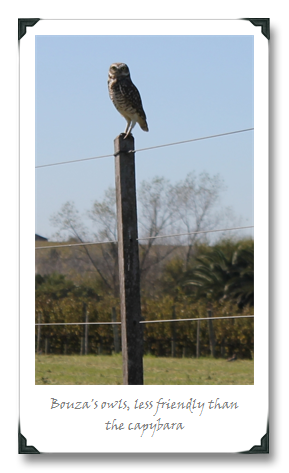 Boido is like a geeky kid set loose in the science lab with the winery’s similar mix of modern (small tanks foudre-style steel tanks), and traditional (epoxy-lined cement tanks that were part of the original winery) equipment, along with tools that fall somewhere in between (large wooden foudre fermentation vessels and new French oak barrels, the latter in which he indulges a few of his reds a bit too liberally for my tastes).

The results, apart from the occasional over-enthusiastic oak bomb, are wines with a lot of promise, if not a lot of tradition; following are the results of some of the wines I tasted when visiting Bouza as a guest of Wines of Uruguay. 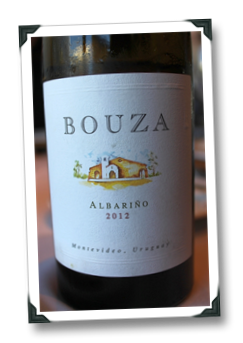 You might be familiar with Albarino’s citrus-and-tropical calling cards, and you’ll find them here, but with an interesting textual twist courtesy of some aging in old oak, lees contact and battonage. See, told you this guy was a bit of a mad scientist. Fortunately, none of the wild-eyed “It’s alive… IT’S ALIVE!!!” tinkering has made even a dent in the  lively mineral and pithy sheen of the Albarino.

Although this Chard has its leesy and toasty moments, what lingers are the white flowers, some peaches, and stone, err, stones. At turns rich and then vibrant, like it’s got both of the Mötley Crüe Theater Of Pain cover stage masks and likes to change up which one it’s showing you, without warning. 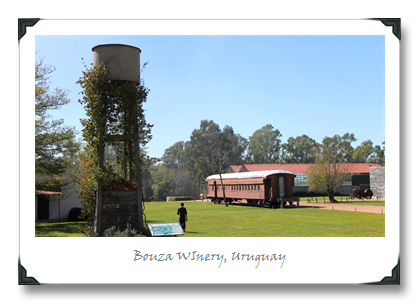 Yes, they grow Tempranillo (they’re experimenting with Riesling, too, by the way); no, it’s not that common in Uruguay. Yes, mixing it with Tannat is a good idea in this case. Focused, spicy, tart, earthy, and smoking a bit of tobacco that it rolled itself. While Tannat (even 40% as used in this blend) can get punishing on the mid palate, that’s not the case here;  mouth-related things are vibrant, chocolaty, and downright lovely, actually. If you’ve got beef, and you’ve got a beef with Tannat for being to rustic, this is the wine that may convert you to the Dark Side. 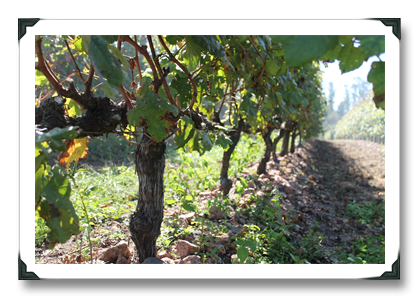 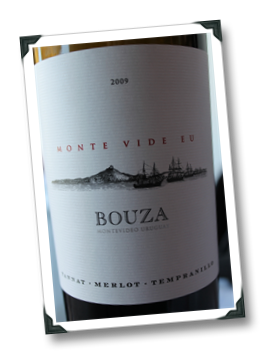 50% Tannat, 30% Merlot, 20% Tempranillo. I’m not sold on Merlot in Uruguay (though you’ll find no shortage of winemakers there who will swear by it), but I’m sold on this red blend, Bouza’s most restrained at under 14% abv. It’s also their most retained red in terms of its development, revealing very little about itself even after four years. But… they saw enough promise in it to name it after the saying that supposedly gave the hilly city of Montevideo its title, and I saw some justification in that potential when I tasted it with Boido. The oak of which Eduardo is so fond is well-integrated here, giving things a spicy edge to them, and there are a lot of elegant ripe fruits hanging out below the earthy clay surface: plums, black cherries, black raspberries. The palate is similarly restrained, eventually (and, like the owls, begrudgingly) putting up with you long enough to give you a short glimpse of the tarter red fruits, vibrancy and minerals that I’m guessing will give this wine plenty of life for a few more years to come.

But what do I know, I’m the one who pets purring capybaras…