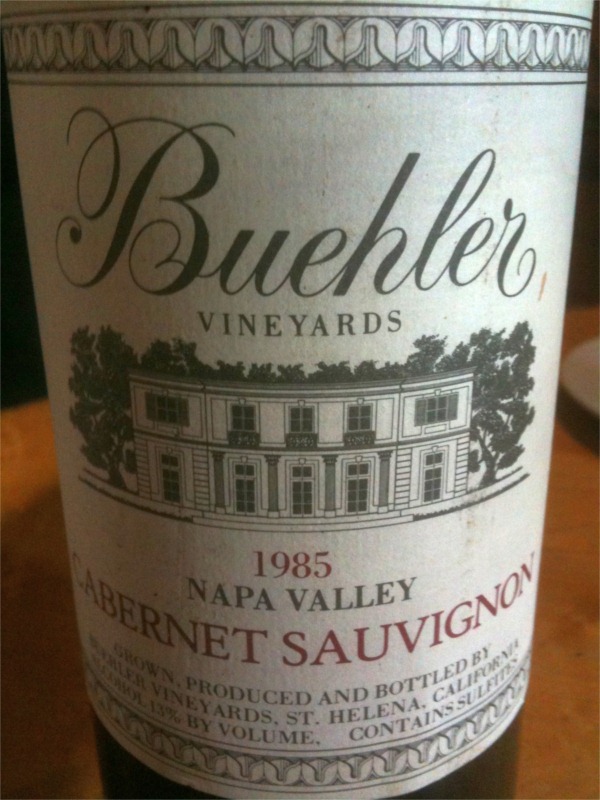 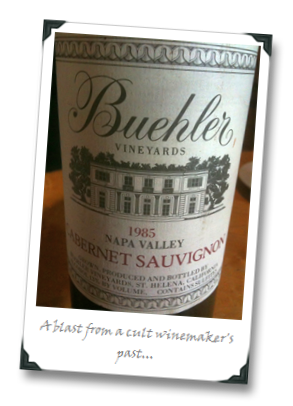 Given the opportunity to taste that wine (which most of you know by now is not one I’d be likely to turn down), I hope you’ll forgive the hastily-taken and relatively low-res image of the bottle from lunch!

Anyway… what does this bottled blast from a cult winemaker’s past have to tell us?

Quite a bit, actually.

The first thing you should know about this wine is that it was Bretty (by which I mean, it had the funky, Band-Aid whiff characteristic of some Brettanomyces, and while I didn’t send it to the lab for chemical analysis, I’m confident enough in ID-ing that smell to say that if it’s not actually Bretty, I’ll eat my senakers). Which makes it the umpteenth Napa Cab I’ve had from the 80s that was at least a little bit Bretty – enough of a volume that I’m now borderline frightened by Napa Cab bottles vintage-dated from the decade that brought us rolled-up jeans pant legs, the skinny tie, and oddly cubist-style haircuts; because it also brought us the Napa-Brett-that-blooms-late-in-bottle.

The second thing that you should know about this wine – and the most important thing, at that – is that it was a far, far cry from being undrinkable; it possessed an impressive amount of tangy red fruit, and after an hour and half or so opened up with secondary aromas of earth and cloves. It struck me as a wine that, while showing its age in the wrinkles near the corner of its eyes, was still full of vigor and a zest for life – or, more accurately, a zest for food.

At less than 14% alcohol, that tangy fruit stood up to fairly spicy beef chili (try that one with a 15.5% abv fruit bomb…). And that opened bottle of Buehler juice went a few hours worth of laps with food and air at the lunch table, and seemed to hardly break a sweat in the process – as time passed, it got more interesting and compelling, and showed only small touches of oxidation. In other words, it was looking pretty hot for a wine that by most measures would be considered as entering retirement age.

For those keeping score at home, that’s damn-near thirty years on, still fruity, still friendly, now also compelling, and all while probably being handicapped by a bit too much Brett. I’d call that a success story – and a finely crafted one at that. A cult wine it’s not, but after tasting it, the fact that it’s winemaker eventually went on to make coveted cult juice doesn’t seem at all far-fetched.

But then, I suppose that I can’t really tell you that for sure, since I’ve yet to try Screaming Eagle – a fact for which my daughter’s college fund has already thanked me a few times over…

16 thoughts on “Blast From A Cult Winemaker’s Past: Buehler Vineyards 1985 Cabernet Sauvignon”