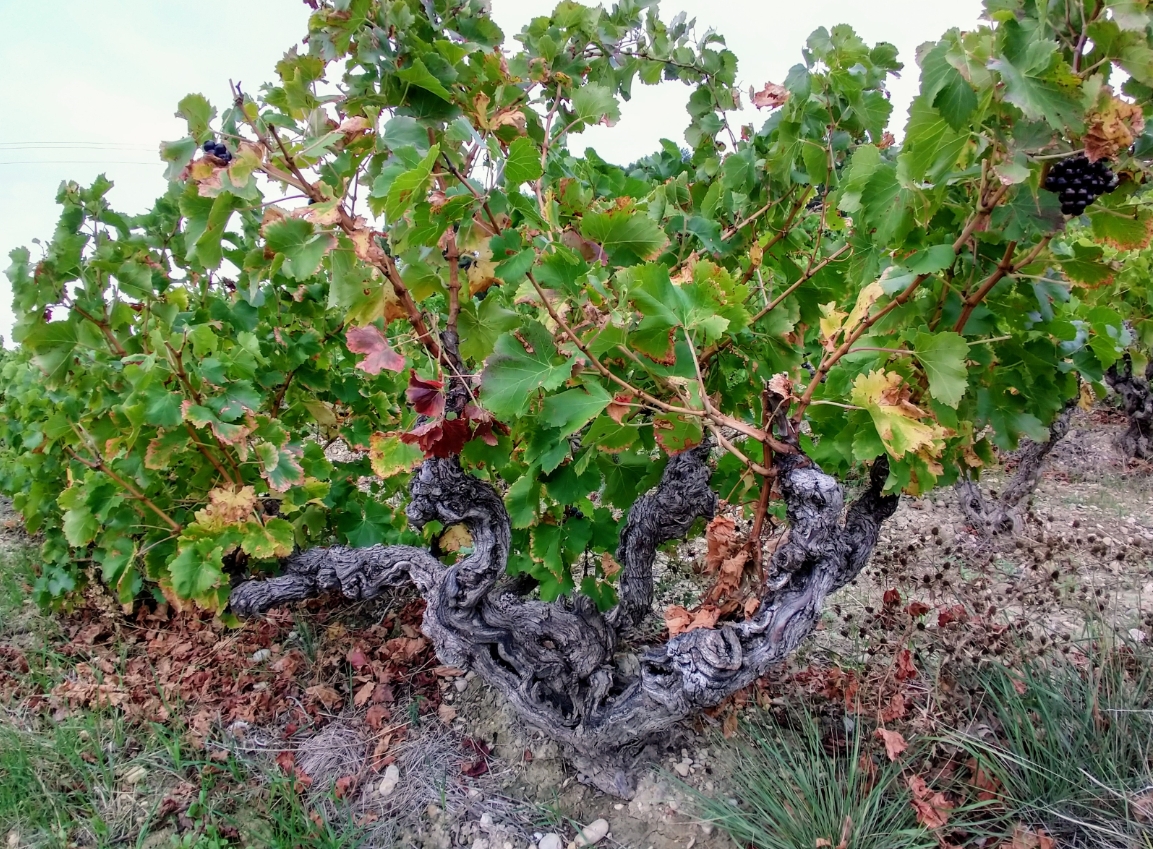 Well… I’m in the unenviable position of having to date myself.

Embarrassingly (not because of my age, about which I mostly don’t care, but because of my obvious lack of knowledge), I knew little about the Rasteau appellation prior to visiting it on a recent Rhône media jaunt, aside from the fact that it was the home of some bad-ass Vin doux naturel sweet wines (which were permitted under the Rasteau AOC since the 1940s). Ok, more like I knew nothing about the appellation outside of its VdN wines.

But the area has been making its dry red wines based primarily on Grenache, with Syrah and Mourvèdre playing heavy roles) under the Rasteau AOC for nearly two decades now, having been approved in 2010. That’s a long enough time that a self-professed wine pro type should have known something about it, but in the relative Rhône timeline is recent enough to force dry Rasteau producers into a market game of catch-up.

And catch up they have. Rasteau’s best producers are doing well by their appellation’s new-old identity, now exporting over 40% of their collective production. There’s a bit more soil variety in Rasteau than in much of its neighboring Rhône AOCs, to the point where its wines have enough going on to mark them as distinct.

Specifically, Rasteau reds are, as Domaine Combe Julière‘s Laurent Robert put it during my visit, “Big character” experiences. “Spicy wines; well-concentrated and powerful, but with elegance.” This was a sentiment echoed by other vintners and proprietors in the area. Réjane Pouzoulas of Domaine Wilfried had this to say when asked about Rasteau ‘s typicity: “You can have full-bodied wine, of course; but with finesse.”

“In Rasteau, you can have wine that can age,” remarked Lavau‘s Benoît Lavau. “The appellation has the potential to do whatever you want. It’s always [about] the balance between tannins and acidity.” He went on to describe their wines as “sunny and strong!” That’s an impressively consistent set of responses based on Rasteau’s new-ish identity; either that, or an equally impressive effort of coordinated marketing planning. Based on my tastings, I suspect the former…

Laurent Robert’s father was in a co-op, and the family were negociants for two decades before releasing Domaine Combe Julière’s wines from their organically-farmed vineyards under their own label. In some cases, their  old-vine Grenache plantings (dating back to the 1920s) need to reach ten meters down in the stone-and-clay soils to find water. The area is a preserve, so new plantings “are difficult” according to Robert. The old plantings are going strong, based on this blend of Grenache, Mourvèdre, and Carignan from the Saint Didier vineyard. Dense, ripe, spicy, juicy, and silky, the black fruits abound in a purple, powerful, and deep red that evokes mint and licorice. The tannins will need a ton of time to come around, but it’ll be worth the wait.

All Grenache, and all about pleasing people, this is a floral and minty rosé, sporting quince, strawberry candy, and almond flavors. The sweetness is tempered by ample freshness, so much so that you could easily get into trouble… this 17% abv beauty is just that easy to drink.

If it takes a tough man to make a tender chicken, sometimes it takes a diminutive lady to make big wines. Elodie Balme’s dad also worked with a co-op (sensing a theme here?), but since 2006 she’s grown the family plot under her own name from 4ha to 17ha (5.5 of which are dedicated to Rasteau). Balme avors concrete for aging, and it seems to lend refinement to the power of her reds. Her dry Rasteau includes Carignan, Syrah, and Mourvèdre with its Grenache base, and it starts with earthy, mineral tones that usher in fresh blue fruits and licorice. Spicy, bold, and approachable.

Violets, raisins, plums, violets, and licorice (duh) mark this finely-grained, deep, and structured sipper. While it doesn’t lack for elegance, this Grenat (Grenache-based) VdN has its bedroom eyes going on, in which one can find themselves getting easily lost.

Lavau have been in Bordeaux’s St Emilion since the 1800s; in the `60s, Benoît Lavau’s dad made wine in Tunisia before eventually returning to France. They’re now the 2nd largest producer of Rasteau dry reds, bottling under their own label starting in 2008. A true GSM, from purchased fruit, and aged in used oak, this is an exercise in tannin management, and is downright silky by Rasteau standards. Black fruits, black licorice, grit, and power, this one isn’t fooling around, but it’s clearly out to make friends.

You can take a guess as to the soil form which this “Clay Spirit” originates. The spirit has much Kung-Fu: licorice, meat, red and blue fruits, dusty herbal spices, mint, wood, minerals, and a thick, full palate. It’s big, bold, and in search of flank steak.

I found it difficult to beleieve that this mix of Grenache, Syrah, Mourvèdre, Carignan, and Cinsault doesn’t cost more like $50. 60 year old vines, 20% new oak, 100% overachieving, you get herbs, licorice, violets, dark plums, dusty tannins, ample grip, tight acids, and powerfully density. It’s a wine that ought to last a good long time in repose.

These guys had the first private cellar of Rasteau, and their know-how is on full display in this blend of single-vineyard, 80 year old Grenache and 60 year old Syrah. Put simply, it’s stunning – particularly in its balance of richness and vivacity. Spicy, minty, juicy, and complex, you could spend hours contemplating the textural elements here, in which a superb balancing act of structure, concentration, and suppleness are taking place.

This  producer has been in the Rasteau area since 1850, and now employ their 5th generation of family vintners, who recently expanded their cellar to keep pace with the production from their 25ha of organic and Biodynamic vineyards, which range from yellow marl to calcarous sediment, sand, pebbles, and (in this win’es case) red marl. Trapadis’ Les Cras is an elegant introduction to dry Rasteau, with its emphasis on red fruits, red licorice spices, vibrancy, and textural complexity.

Wow. Clocking in at 15.5% abv, and 100 g/l of residual sugar, and all of it exquisitely balanced with minerality, freshness, and floral, minty aromatics. It’s bursting with blue fruit, dried figs, dates, cherries, and a sense of power, culminating in a finish that is enviably long.

Sixty percent of the regional production for Rasteau comes courtesy of this co-op, a collection of 80 growers (each averaging 5-10ha of vines); it’s the operation that, in terms of modern wine market history, put Rasteau on the map. As is usually the case with co-ops, I found their higher end dabbling to be the most interesting. To wit: Domaine de Pisan, a supple GSM with ample mineral and spice notes, offering a mouthfeel that is at once both powerful and well-developed, refined, and totally approachable.

I had the good fortune to end my stint in Rasteau at restaurant Numero 75, tasting with members of the Ferran family who have owned Domaine des Escaravailles for three generations. Their fanciful name dates back to a time when penitents working in fields wore black, causing the locals to unceremoniously label them “beetles.” Their Heritage red is made using old-vine Grenache grown at 300 meters elevation; it’s fresh and delightful, big but balanced, with a ton of cherry fruit, and long tannin chains (courtesy of the elevation and long ripening times). It’s a good ager, too (the 2011 was coming along quite nicely, and still has some way to go before it peters out).

The Beetles are also purveyors of two excellent, high-quality VdNs: the white (Genache Blanc from stony, hillside soils) is nutty, earthy, and floral, dominated by sweet pear fruits; the red (Grenache, also from stony-clay hillsides) is rich, floral, and concentrated, with cocoa and black cherry action. Both are worthy of your time when the sweet-tooth comes a-callin’.