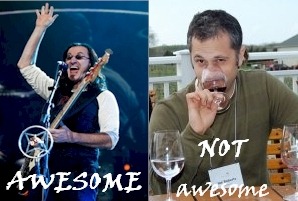 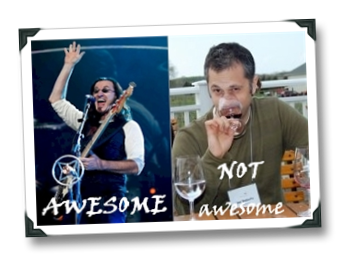 Look, I understand that being able to pay attention to a wine and accurately (and compellingly, and entertainingly) describe a it to someone else takes effort. And it takes writing talent. But these are not special gifts about which anyone should overly-applaud themselves.

Think about it: if you can write well, then chances are you write a lot and were probably born with some aptitude for language generally. In my personal example, I may have the writing gift (that’s arguable, by the way!) but I’m also about 5’5” and even if I spent 10,000 hours playing basketball I will probably never be good enough to play pro. So just as I’m not ashamed of my inability to dribble the rock, I’m not ga-ga over myself just because my brain was wired with a predilection towards stringing a few well-written sentences together. Yes, it takes hard work and dedication, but so does anything worth doing well.

As for the wine-tasting-ability portion of this equation: I’m constantly amazed at how many people tell me they could “never” pick out flavors and aromas in wine. It’s like they assume those of us who can write about wine have received some special Reiki attunement, or were visited by witchdoctors, or were born with something special about our noses (aside from its slightly-oversized capacity, in my case). And they assume that they in turn don’t have that ability and therefore could never acquire it. They have already determined it impossible in their minds before even trying it. WTF?!??

The irony, of course, is that it is not that difficult to acquire wine tasting skills. It just takes patience, a lot of focus, and a commitment to taste wines an obscene number of times. That’s it. It’s really that simple, and there really are no shortcuts (but also very few barriers). Very little reasons there for someone to either pull a muscle patting themselves on their back for their awesomeness – and little to fear for those who think the tasting skills are somehow unattainable.

And let’s not even get started on the relative importance of what we do in communicating wine to people; last time that I checked, we are helping people out, for sure, but we are certainly not saving lives here.

So please, peeps, spare the world any of your wine-tasting egos. In fact, banish the damn wine-tasting ego totally, and free up some time and energy for sharing your wine experiences and helping others get more involved in loving wine – there’s more of a spiritual pay-off, it’s more fun, and will fill up your soul with more joy than waxing philosophic about your own tasting abilities ever could.

And if you’re one of the folks who wants to get your head into describing wine but have felt as though it seemed impossible: remember that walking, talking, cutting paper with scissors, and properly writing a lower-case letter “m” seemed impossible to you at one point or another in your life. Suck it up and, in the words of the goddess of competition and oddly-shaped sneakers: just do it!