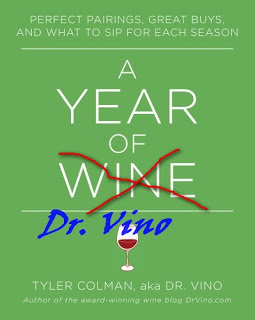 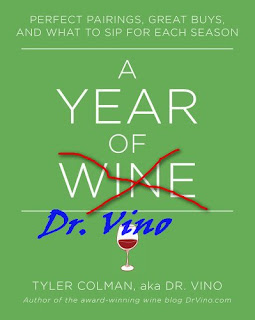 Despite having the word “Year” in its title, this article is not another cheesy 2008 recap post. Especially considering that I don’t need another one of those, since I’ve posted about 240 of them in the last several days. Or something like that, anyway.

In terms of measuring wine blogging success, 2008 was The Year of Dr. Vino, a.k.a. Tyler Colman. Come to think of it, 2007 was nearly the Year of Dr. Vino as well, considering Tyler received a James Beard nod for his writing that year. So, basically Tyler is kicking all kinds of ass in the blogosphere, but what made 2008 the Year of Dr. Vino was Tyler’s superbad onslaught (both on and) offline with the release of two (very good) printed books.

You would probably expect a PhD holder in Poli-Sci to be a decent writer, so it’s no surprise that the books are well-written. What is surprising (to me, at least) was how accessible Tyler’s books are for the novice wine aficionado, and how well his blog writing style, which consists primarily of short articles that focus heavily on interactivity with his readership, translates to his longer format works. Capturing that accessibility is not a skill that most of the academics that I know posses. 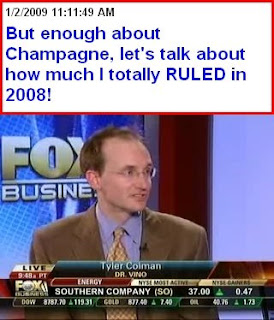 While Tyler can be a quiet voice online (case in point, how is there justice in the universe when my twitter account has more followers than Dr. Vino’s??), he was all over traditional media in 2008: in addition to publishing two books, he could be found in the pages of major newspapers and wine mags, as well as on television. For example, Tyler is a semi-frequent guest on FOX Business, discussing the impact of the recent economic downturn on the purchase of luxury items like Champagne (see inset pic for how I might have handled this situation if I were Tyler).

This significance of this sort of credibility (not to mention shrewd brand building) should not be overlooked. Tyler is quietly – and successfully – positioning himself as an erudite opera-goer to Gary Vanyerchuk‘s Joe 6-pack. Both are important, and both are signaling the establishment of a new breed of experts active in the field of wine appreciation.

I won’t go into detail about Tyler’s first book release, Wine Politics, because with a 9-month old baby that will start screaming to be fed at any moment, I simply don’t have the time, except to say that it’s a compelling work that those fascinated by wine should check out, especially considering how dependent the world of wine is (and has always been) on the world of politics.

I will say a bit more about Tyler’s second book, however, A Year of Wine: Pairings, Great Buys, and What to Sip for Each Season, which Tyler sent to me several weeks ago, and which I’ve only recently gotten a chance to read (before you flame me for being lazy, remember: 9-month old!).

It’s not that A Year of Wine presents novel information that has otherwise eluded many of the other excellent books for budding wine geeks already on the market. In fact, it doesn’t really present anything totally new, even though it does have incredibly useful information (for example: how to successfully navigate the wine list when at an important business dinner for the first time).

The masterstroke is that A Year of Wine is a wine intro book penned by someone who has so garned so much credibility both on and offline. Put another way, Tyler speaks both Internet and brick-and-mortar.

While it can be enjoyed by just about anyone who is new to wine, A Year of Wine is probably best suited to those who already know what they like in their wine, but are looking to understand wine more fully and want a different approach then learning the basics and then exploring each region in order of importance / volume of production (which seems the typical layout for most wine reference material). A Year of Wine reflects Tyler’s post-grad writing style, but might also appeal to a much younger audience (see pic below – though this author had to remove A Year of Wine from that reader, as she’d found it compelling enough to begin eating the pages). 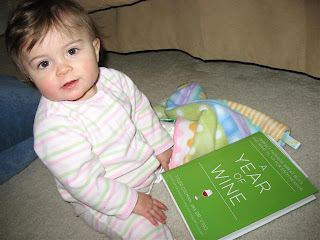 Anyway, if I have a criticism to level at Tyler (and of course I do, because I’m incorrigible), aside from a distinct lack of overall mentions to 1WineDude.com on his blog, it’s that Tyler needs to take his focus on interactivity with his blog readership and devote similar focus to his interaction within the community of online wine writers, retailers, and wineries. His voice is quiet within that space – it could benefit significantly from Tyler’s wisdom and experience, and his penchant for keeping things honest. Tyler, we need ya here, man!