Quick – how many abbeys are there in the U.S.?

The answer is “way more than you’d think!” 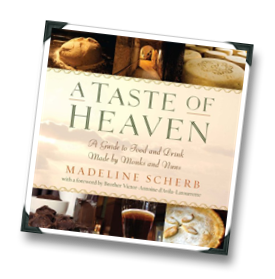 Abbeys – their contemporary ways of life, histories, and (most importantly) culinary delights – are the subject of Madeline Scherb’s first book, A Taste of Heaven: A Guide to Food and Drink Made by Monks and Nuns.

Part travel guide, part history lesson, part valentine to all things Catholic, and part cookbook, A Taste of Heaven makes for interesting reading and is structured around a gourmand’s fantasy meal (the book’s sections, in order cover Spirits, Cheese, Sweets, and Other).  Those who love beer and cheese will especially appreciate the substantial portions of the book devoted to Belgian Trappist abbey brews (such as Orval) and the abbeys of France (such as the walnut-liquor-enhanced fromage of Echourgnac), respectively.

Now, I’m not religious and this is not a beer and cheese blog (though I love beer just as much as I adore wine), and while I love my foodie friends I don’t share their keen ability to translate culinary thought-experiment (recipes) successfully into visceral reality (food that actually tastes good), and I struggled with whether or not I should cover A Taste of Heaven (which Madeline kindly sent to me as a sample copy).  But, I did in fact find a wine angle in this book, albeit a small one.

Citeaux Abbey, situated just outside of Dijon in the Cote-D’or in France, is covered in A Taste of Heaven and the abbey’s history is fascinating.  Citeaux was founded in 1098 and initially struggled to find recruits for monks in an area of France that was already known as a lap of luxury.  At one point, the Abbey owned 10,000 acres of land in Burgundy, including… Clos Romanee.  That would probably be worth enough to buy a space shuttle nowadays.  Apparently, the cheese there is… well… heavenly to this day.

Those who get the travel bug to check out the famous Abbeys of Europe (or the not-quite-as-famous Abbeys of the U.S.) would do well to first check out A Taste of Heaven.  But be warned, by the looks of the butter, egg, and lard content of the recipes found in Scherb’s book, eating abbey food isn’t exactly for the (literally) faint of heart.

Oh, yeah – and whatever you do, don’t sing or chant along loudly with the monks (apparently that’s bad abbey-visiting form)!

10 thoughts on “A Taste of Heaven (Book Review)”