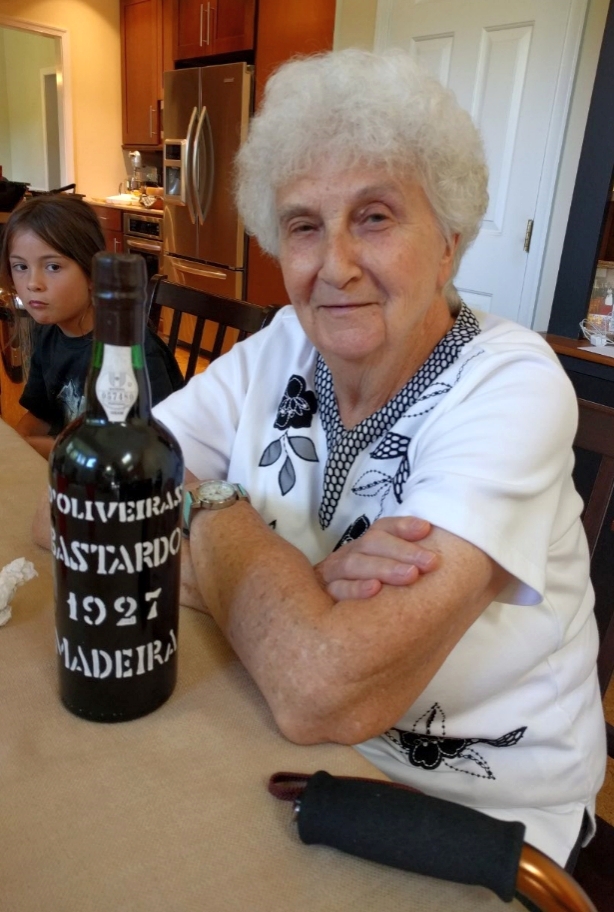 I was heartened by all of the positive reaction to a recent Book of Face post regarding the combination of two aging souls who are still kicking all kinds of ass.

The first is my cousin Kathleen, who turned 89 years old this past Saturday. The second was a certain rare-ish Madeira wine that happens to share Kathleen’s birth year, and so became one of the (very) few wines that I actually purchased with my own hard-earned cash when I toured the Portuguese island earlier this year.

Since posting the above photo of the two of them together at Kathleen’s birthday party, I’ve been contacted by, well, several of you about spilling the beans on how this wine tasted. And so I shall, but not before I give a shout-out to the coolest relative I’ve ever known…

By most measures, Kathleen – who has lived roughly a mile from my childhood home for my entire lifetime – was my grandmother. I had a grandmother on my mother’s side, of course, with whom we lived and who my brother and I drove nearly crazy with our terrible behavior as kids; so while our relationship was good overall, I wouldn’t have called it deeply, emotionally close. I didn’t have much exposure to my grandmother on my father’s side, having decided quite early on that I’d learned enough about my father and his father to warrant avoiding them.

Kathleen played a key role for me while growing up; spoiling me, offering consistent help and helpful criticism, spotting me cash for Star Wars figure when I was a couple of dollars short, patiently listening to my yammering, often quick with jokes, and willing to goof around with the family kids. I have an early memory of walking hand-in-hand with her down the street on an errand when I was very young, with her explaining how to watch for traffic, and why and how we had to pay for whatever goods she was buying. I have much later memories of her lamenting over the performance of the Phillies, indoctrinating my daughter into the same family holiday traditions that she shared with me, and being quick to call bullsh*t on my ex-wife’s cheating. Always independent, she is only just now beginning to slow down.

The thing that really hits home with me, however, and is the real source of Kathleen’s ass-kicking karma kung-fu, is that I cannot recall a time, ever, when Kathleen wasn’t helping someone, taking care of an aging relative, hosting a family gathering, cooking for a small army… From my vantage point, she’s always been helping other people. Probably the best lesson she’s imparted to me, through observation of how she lived her life, was a sense that to tap into the better angels of our nature, we need to take care of others.

Hopefully, that provides some perspective on why I was so stoked to get a birth-year wine opened for this lady.

When including this wine in my “Tasting Immortality” round-up of rare Madeira vintages for Palate Press, here’s what I had to say about it (from a tasting session held at D’Oliveiras): 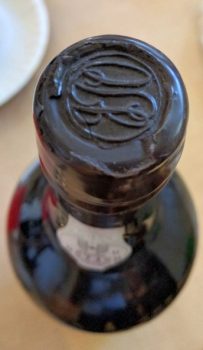 Bastardo is one of the few fine wine grapes used in Madeira and Port that isn’t native to Portugal; it’s more commonly known as Trousseau or Trousseau Noir in its home region of Eastern France. Like my cousin, it’s a rare breed (particularly on Madeira, due to its low humidity tolerance).

Having now imbibed the same wine from another bottle that traveled back with me to the States, I’m hard-pressed to expand to on that initial tasting note. I can add that it’s powerful, perky, and amazingly persistent. Among Madeira wines, which as you’ve probably noticed from the last few months’ worth of mini-reviews here (which I’ve flecked with gems tasted during my time on the island) is a region chock-full of unique wines, this wine stands out, which is about the highest praise that I think I could bestow on it at this point. After opening the bottle, confirming all was well, and dong the critic thang with a small taste before serving it to the party guests, I can tell you that it was a joy to imbibe.

In other words, it kicks almost as much ass as Kathleen does…