Feels like forever since I posted the first edition of 5 Blogs in 5 Minutes.  Time to pony up five more wine blogs that I think are worth checking out!

Another Wine Blog – The brainchild of Amy &  Joe Power, this is a site that has been on top of the hottest topics in the wine world lately.  The writing is done well, which makes up for the confusing (to me anyway) new layout of the website.  Anyway, what I really like about this couple is that they always provide an educated and opinionated take on those topics, which is why I read blogs, after all!

Wine Without Borders – Talk about fighting the good fight… This blog from the Specialty Wine Retailers Association sheds the harsh light of truth on the despicable practices of those who are trying to keep a monopolistic strangle-hold on alcohol distribution in the U.S. Living in the Communist-wealth of Pennsylvania, I have a vested interest in the SWRA’s success.  This is an organization and a movement that needs and deserves your support.  Tom Wark deserves a medal for the work he’s doing here.

Rockss and Fruit – Think that I speak my mind?  Well, Lyle Fass makes me look like a U.S. Ambassador to Saudia Arabia.  Normally, stream-of-consciousness style blogs bore the hell out of me, but Lyle has a way of making even the mundane seem interesting and his recollections of interacting with some of the world’s best wines borders on the poetic.  And when he tears something down, damn, he really tears it down! 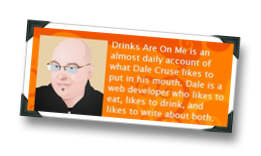 Drinks Are On Me – Is there anybody who doesn’t know Bostonian Dale Cruse?  If not, you’re in for a treat.  Dale is one of those truly unique figures in the wine world – funny, articulate, and thoroughly original in the items that he decides to cover on his blog.  What I love about DAOM is that I never know what Dale is going to talk about next, but I’m pretty sure I’ll be laughing my ass off when I read it!

Wine Lovers Page – This site has been around for a good long while and while not technically considering itself a blog, it more-or-less functions as one anyway.  I’ve always found this site to be insanely useful and approachable.  They also have wine-related forums that are a few-thousand members strong. Worth checking out.

2 thoughts on “5 Blogs in 5 Minutes: The Second Edition”