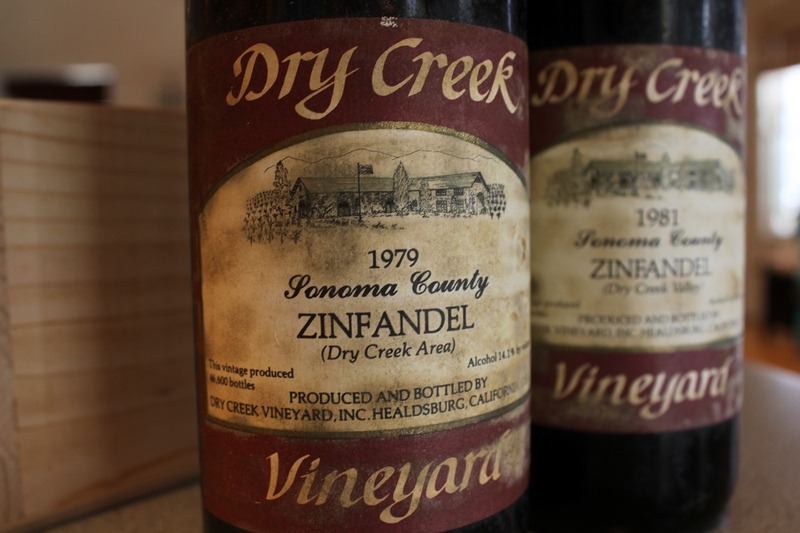 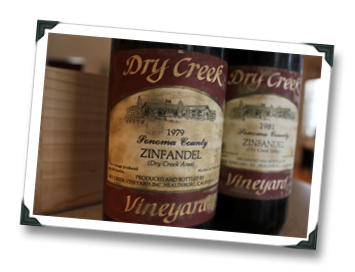 2012 may very well be remembered as the year of 40 when it comes to California wine.

Aside from Kermit Lynch celebrating the 40th anniversary of his Berkley area wine shop this year (okay, no CA wine there really, but I know for a fact that Kermit has enjoyed some old Ridge from time to time), three venerable CA producers are also celebrating their 40th business birthdays (just as I did in 2012… notice the grey…): Silver Oak, Jordan and Dry Creek Vineyard.

The similarities between the all three of those wine operations is striking. Each has some aspect of generational family ownership with some personally very nice people behind the scenes, each employ fairly distinctive, recognizable winemaking styles, and all are (mostly) successfully navigating their brand waters to appeal to younger consumers (and not just their parents).

And while I’ve enjoyed wine from all three, given the choice on the QPR front I’d have to give the edge to Dry Creek Vineyard. It’s tough to argue with their pedigree (they claim to be the first to use the terms “Old vine Zinfandel” and “Meritage,” and they’re certainly the first to plant Sauvignon Blanc in the Dry Creek area), their commitment to the Dry Creek Valley in general, and the consistent improvement in their wines, some of which are ridiculously low cost when you consider the quality of what you’re getting.

So it seems a bit stupid that I was surprised that DCV’s relatively pedestrian-priced Zinfandel could age well and still be tasty after 20 or so years. And yet, unlike DCV’s die-hard fans, I was surprised that I was enjoying one of their Zins that was bottled when I was about seven. But I can now tell you that while the current Heritage Zin price point (about $17) doesn’t suggest a long shelf-life, the crate of samples of DCV Heritage Zinfandel that they recently sent me as samples – with selections extending back through each decade of DCV’s existence – certainly did…

The wooden crate containing the four retrospective bottles, which you will see in the embedded pics, was a nice packaging touch, and an interesting idea. From a critical perspective, we can pretend that tasting through history like that isn’t exciting, but from a wine lover’s perspective it borders on geek-gasm. Would you turn the opportunity down? Didn’t think so. 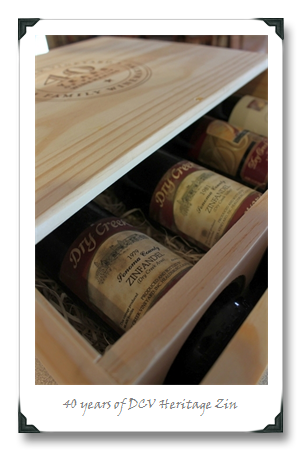 The first in the lineup was the 1979 Dry Creek Vineyard Zinfandel, a wine that dates back to when the Steelers won Super Bowl XIII by beating the dallas cowboys (no, I didn’t forget to capitalize that – I just didn’t want to out of lack of respect for the cowboys). This win ought to have been deader than Lincoln, and the burnt sienna color suggested it might be over the hill, but the wine (and its cork, incidentally) were in fantastic shape. Certainly it was closer to being on the decline than not, but it still had freshness and vibrancy to it. Wet leaves, licorice, allspice, cinnamon toast, red plums, dried dates, all kinds of intellectually and also pleasurable stuff going on. The palate was thinning, savory, balsamic, figgy. Geek-tacular, if not total spectacular. 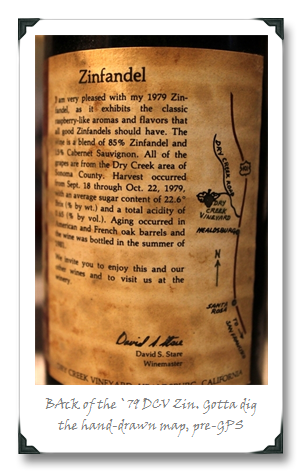 The `80s were represented by the 1981 Dry Creek Vineyard Zinfandel release. Garnet in the glass, lots of reddish hue still left. But, alas, this one was getting musty, quite gamey, though still with plummy and dark berry fruits deep down in there. More truffle than fruit, and it was showing the heat. If my bottle was representative, I’d say this one is now sort of like playing your granddad at basketball while he can still get around pretty well – fun, but bordering on embarrassing if you go too far with it at this point. No Steelers SB victory that year (though they did beat the L.A. Rams to win Super Bowl XIV in 1980. Just sayin’. 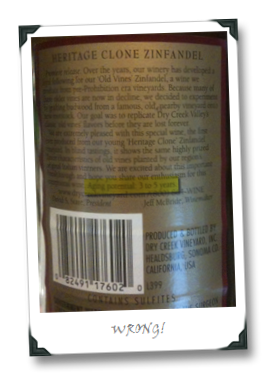 The nineties (not really gonna go there in terms of Steelers… though they did appear with the cowboys in Super Bowl XXX in `96…) saw the still-stellar 1997 DCV Heritage Zin. It had a good amount of purple in the glass, hints of flowers and spices and dark plums on the nose, and that trademark dusty tannic structure on the palate. Clay-like earth, dried figs, blackberries, red raspberry. You knew it had age on it, with the tea leaf and toasted nut action going on, but no way I’d have pegged this still fairly fresh wine as being that old. If you’re a DCV fan, you should go a bit easy on me, though; after all, the 1997’s back label did read “Aging potential: 3 to 5 years” (damn, they were soooo wrong on that). Drinking wonderfully now, and for me this was at a bit of a sweet spot.

As for the 2000s (during which the Steelers won two Super Bowls…), that one you can still buy so let’s actually sit down and give that one a review, shall we? 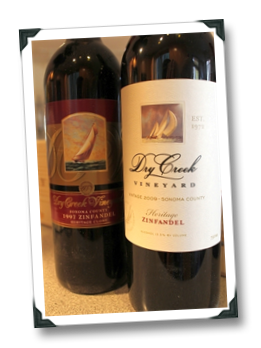 Bottled in a year when the Steelers beat the Arizona Cardinals in what is arguably the greatest Super Bowl game yet played (yes, I will stop with the Steelers sh*t now), this is a spicy, rich Zinfandel. The richness surprised me, as of the four samples in that retrospective crate, the 2009 was the only one that was under 14% abv. The oak is still prominent but it’s well executed, and the mouth feel is nice and round, lots of dark berry action but while its full, it still has a sense of fresh red berry fruit at its core. Still a tad tight, if you’re going to crack it open now it will ask you for short ribs. If you’re going to wait, then hell buy two bottles and see if it can stand up to its older siblings in terms of aging potential.