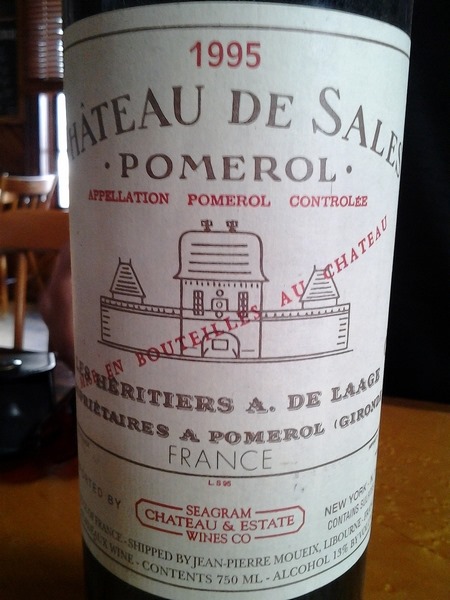 I’ve been lax in my wine review coverage throughout the start of 2015 here on 1WD. This is not due to a lack of material (I have late 2014 visits to Red Car and Amici in the coverage pipeline, as well as a tasting of a couple of magnums around the Winter holidays, so the material is stacking up), but I’ve got so much going on on the positive end (professionally) and the negative end (personally) that I haven’t been able to get it together to do those items justice.

Not that I’m starting now, alas.

I tasted something recently (courtesy of a business lunch with local Philly wine guy Bob Trimble) that I found intriguing enough to at least temporarily release me from the dreaded lack-of-formal-featured-reviews rut.

As it turns out, the little number that Bob and I drank over lunch has a negative story of its own, and one that, in retrospect, might be undeserved…

And so it goes with Bordeaux, which everyone seems to love to hate right now (guilty!). But the Bordeaux in this case was twenty years old; or, better put, twenty years young!

That one could find this wine for such a reasonable price ought to set off alarm bells. And the reviews over the years certainly haven’t been kind.

But I will say this; this wine tasted as if it was, maybe, seven years old. The color (see crappy inset cellphone pic) was extraordinarily lacking in its brickish-ness, with only a slight hint of that action happening on its edges.It was still red-fruit-plummy in the mouth, and eventually opened up aromatically with notes of cedar, cloves, plums, and, eventually, that walnut shell thang that good old Bord’x does so damned well.

My experience, based on this bottle, is that the former lackluster reviews of this under-performer of the `95 class would have steered you plenty wrong on either this wine’s tastiness, its complexity, its potential longevity, or any combination of the three.

I did find two rather serious downsides to this wine, however:

1) The finish was stupidly short for such a well-preserved Pomerol; shockingly, embarrassingly short (though quite nice), and,

2) It’s stupidly delicious, making it all too easy to suck down an entire half of the bottle over lunch.

You’ve been warned (on multiple accounts)!