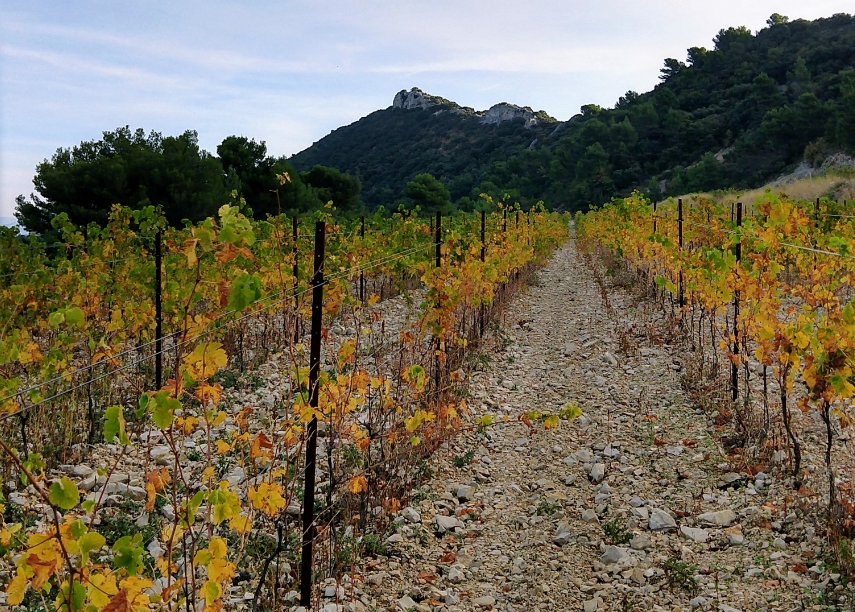 Smack up against the Dentelles de Montmirail mountain range sits Gigondas, a former ancient Roman soldier retirement home area and Southern Rhône cru that, technically, contains more woodlands than vineyards. And that’s after a killer frost in the 1960s wiped out a good portion of olive tree plantings, ushering in a shift towards more vine plantings. All in all, Gigondas is about one third the size of its more famous, direct-competitor cousin, Châteauneuf-du-Pape.

Terroir here is “like a layer cake,” noted Domaine Pierre Amadieu’s Henri-Claude Amadieu when I visited on a media tour last year. “A layer cake of limestone and clay, limestone and clay…” While Grenache is the name of the game here, there are a few main differences between Châteauneuf and Gigondas, excluding the fact that Gigondas’ slightly warmer climate has a tendency to make their reds even more powerful than CdP.

The entire Gigondas AOC has a North-Northwest orientation, and it’s plantings are almost exclusively at elevation – in some cases, upwards of 500m. It’s rugged, hillside farming on soils that range from marls, to sandstone, to Miocene sand, to Cretaceous limestone rich in fossilized marine life.

The short version when it comes to Gigondas: height matters (see what I did there?). The higher elevation makes for stout reds that might be compact, but pack a big, tall punch…

Antoine Dupré looks after the vineyards for Gabriel Meffre, which include some of the most rugged in all of Gigondas. The Sainte Catherine is supposedly their “easier” drinking Gigondas, but apparently they forgot to tell that to this kick-ass blend of (mainly) Grenache and Syrah. Iron, leather, meat, pepper, and raspberries, all in a clean, smooth, fresh package, with dusty, dried herb edges. Sure, it’s more power than poise, but the authenticity just oozes out of every ounce.

Named after the pine trees that protect the vines from the mistral wind, this 60/40 Grenache/Syrah hails from vines aged between 80 and 100 years. Smoked meat, pepper, herbs hang on red/blue/black fruits, with notes of iron and chalk, then earth, grip, and leather. The mouthfeel is pure sexiness, generous almost to a fault.

Sandy soil Grenache pairs with mountainous calcareous soil Syrah here, and the result is a juicy gorgeousness of plummy fruits with dried herbs that are so fine that they almost appear in olfactory relief. Chalk, elegant dark fruits, and finesse suggest a lighter, gastronomic touch; the ample structure suggests a good aging curve.

In the 1920s, Henri-Claude Amadieu’s grandfather Pierre was the first to bottle wines as “Gigondas,” selling them to the restaurant market. Now, Henri-Claude, along with five other family members, runs the show at Pierre Amadieu, and he is a tireless promoter for the region – he talks fast, drives fast, and ends nearly every sentence with a flourishing “voilà!” as a matter of emphasis, particularly when discussing the aspects of Gigondas’ uniqueness. This old foudre-aged Grenache/Syrah is an anniversary release, and its sinewy texture, adamant floral/herbal nose, and fresh, leathery, chewy blue and red fruits all seem to end with a vinous voilà, as if adding an exclamation point on each aspect that makes this red so good.

This estate dates back to 1709. In the past 310 years, they have learned something, apparently, about pleasing the red wine crowd. At least, this bright, floral, mineral, funky, and herbal wine suggests so. Blue fruits abound, as does an intense, linear, and focused core of balanced acidity and tannic grip.

“The place is exposed; the wine is rich, compact, like the ground,” explained Domaine de Bosquets’s Julien Brechet, when discussing the vines that his grandfather planted at 350 meters, open to the sun and wind on marl and limestone soil. Despite its height, their higher vineyards aren’t hit by the cooling winds, so the grapes ripen earlier. As to the winemaking approach, he put it this way: “we’re not here to make ‘impressive’ wines; today, I make less work. I’m finally lazy, but it’s better for the wines!” One could argue that he has failed spectacularly, because the wines are not just impressive – they’re among the finest in all of Gigondas, and, by extension, in all of the Southern Rhône. Case in point: the “Le Plateau,” crafted from mostly old vine Mourvèdre and sporting about as pure a purple color as is vinously possible. Violets, roses, herbs, pepper, juicy blue fruits… bright, focused, structured, young… it’s just stellar all around.

Primarily Grenache, this is an edgy, tight, intense red. With burnt toast, dried herbs, saline, minerals, plums, chalk, violets, and ripe red and blue fruits, there’s just so much going on here that it can at first be intimidating. But fear not, you’ll soon get over it, and get on to drinking. In earnest. And with gusto.

If it’s garrigue you’re after, this Grenaceh has it in spades. It also has florals, fruitiness, and overall aromatic harmony with a concentrated, powerful, poised, and gorgeous focus that is almost boastful in how rich, luxurious, and muscular it is. The finish is chewy, extensive, toasty, and full of cocoa.