This is not because I don’t like the sports franchises of my adopted-home nearest-metropolitan-city; the only major sports category in which a Philadelphia team isn’t my #1 is the NFL (Steelers fan here), and even then the only time I wouldn’t cheer on the Eagles is when they’re playing the Steelers (which is, thankfully, a relative rarity).

The reason I don’t listen to Philly sports talk radio – especially this time of year – is because for many, many moons it’s been full of the self-flagellating, though legitimate, tales of woe of Eagles fans, many of whom have literally gone their entire lives wondering what it would be like for their home team to be crowned Superbowl Champions.

This week, I’ve be listening to Philly sports radio almost non-stop. And yes, it really is that good, even for a somewhat-jaded NFL fan whose fave team is, ahem, kind of used to this sort of thing (at least one time more than everyone else, in point of fact). I mean, people have been calling in literally sobbing tears of joy, and if you live anywhere near the Philly area, you immediately understand why. This week, an Eagles fan popped open a bottle of bubbles that has been in his fridge since late 1980 (when he expected his team to subsequently prevail in their first Superbowl performance). Now that, my friends, summarizes Philly’s Eagles fandom. By the way, I swear this will eventually turn into a wine review of a sample bottling.

It’s not just that the Philadelphia Eagles finally – finally! – brought home a Lombardi trophy after decades of enviable-but-ultimately bridesmaid-not-bride NFC success. It’s how they did it that makes this first Superbowl win so brilliant for this city. Unless you were a Philly sports fan, you were writing off Superbowl LII as the final coronation-to-godhead-status of the most successful quarterback/coach combination in modern NFL history. And instead, that combo got taken down in an out-play-calling, out-throwing shootout, by a QB/coach combo that was almost universally mocked, and both of whom had previously considered calling the NFL quits (and are now being hailed as sports geniuses).

A rag-tag group of talented, dedicated, underrated upstarts, many of whom were backups at their respective positions, just wanted it more badly, and worked both harder and smarter, than some of the most talented and successful performers in the history of the sport. And they beat the more dominant opponent at their own game.

Hello!!! This city erected a statue to Rocky Balboa. This city is the spiritual embodiment of the underdog. And so this Superbowl is the perfect David-vs-Goliath story for a city that needed exactly that outcome at exactly this time. And it is f*cking glorious…

If there’s a better time for the mass consumption of Champagne in Philly while listening to Eye of the Tiger on repeat, I’ve yet to encounter it in my lifetime… 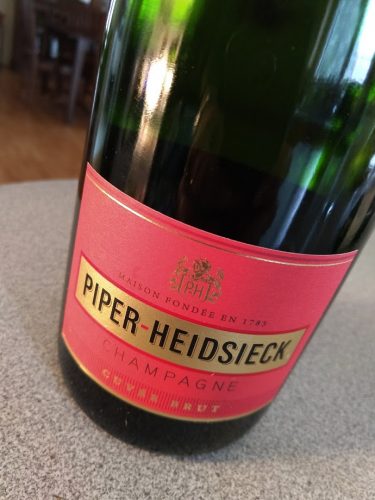 A blend of Pinot Noir, Pinot Meunier, and Chardonnay in descending percentages, around 15% reserve wine, and literally sourced from about 100 Champagne vineyards, you can regularly find this for under $40 on sale, and at that sale price it comes off as one of the better picks in traditional Champers.

Pound for pound (sorry, ml for ml), this is consistently Piper’s best bang bottling for the buck. The current marketing surrounding this blend centers on seduction, which is all well and good, but it’s just as easily a celebratory pick, because the balances between richness and perkiness, green apple and brioche, flowers and earth, all hit a very well-threaded, coherent equilibrium that makes this complex without being overly intellectualized, and just dangerously easy to imbibe (and almost as easily paired with a wide variety of food… wings and cheesesteaks included).

What does the future hold for the Birds?

Honestly, who give s a sh*t right now? Not even the Superbowl MVP backup quarterback and now-lauded Eagles head coach are falling into that look-ahead trap, and they are wisely advising the city to just take it in and enjoy a well-deserved moment of glory.

And I agree with them; I’d only add that you should consider drinking bubbles when you do it.