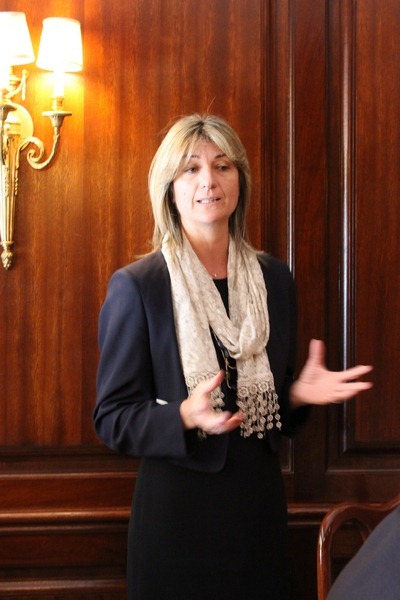 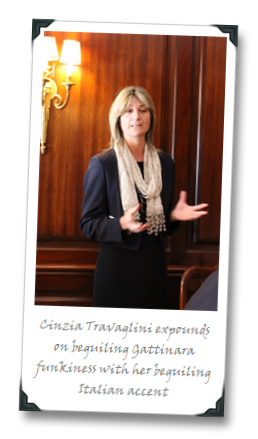 To put things into perspective, while the soils in northern Piedmont differ somewhat area to area, the general climate is similar between them, and the focus of each is almost exclusively on Nebbiolo. Surrounded on three sides by the Alps, Piedmont covers about 10K square miles – it could easily fit into the largest city in the U.S. by area (Yakutat City and Borough, in Alaska – trivia time!), and sports about half the population of NYC itself. Gattinara is marked by the reddish color of its soils, which mirror the mineralogical composition of the Alps themselves. The area also enjoys a relatively high-elevation and strong diurnal temperature variations, which in my experience helps to preserve acidity (and these suckahs are certainly not lacking in acid). The soils in Gattinara smell flinty (according to the importers who spoke at our event, anyway), and probably account for the mineral undertone one consistently (at least, in my case) picks up in its wines. 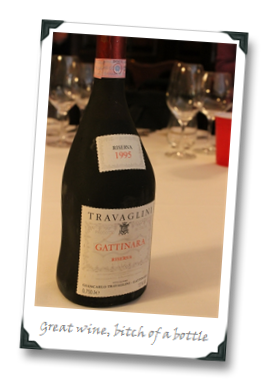 The other consistent aspects of Gattinara wines – particularly in those from Travaglini, which were most prominently featured at the WMG luncheon – was that they have a tangy, stewed fruit quality, aren’t afraid to show off an herbal/veggie side, and are beautifully aromatic and perfumed. And potentially long-lived, which ironically is why Travaglini Riserva comes in what must be the worst-shaped bottle for long-term storage I’ve ever encountered.

Cinzia Travaglini, Gattinara native and the third-generation owner of Travaglini, was on hand at the event and I asked her about the oddly-shaped bottles. She seems to have to answer this question about seventeen billion times per year, and so was quick to answer (and yes, it was with a beguiling Italian accent). “It was designed by my father,” she told me, “in 1958. It is because the wines have such a long life; the bottle is like a decanter, to protect it from sediment when you pour the older wines.”

A bit ingenious, both from a practical and a marketing standpoint, but I’d hate to try to stack those bottles in the cellar without them falling all over each other and all over the place… I think it would drive me into a fit of insane rage, actually.

Fortunately, the wines inside those bizarre bottles are worth the potential aggravation. We tasted through a few older vintages of the Travaglini Gattinara Riserva, and some of them are only just getting started in terms of coming around to drinkability. 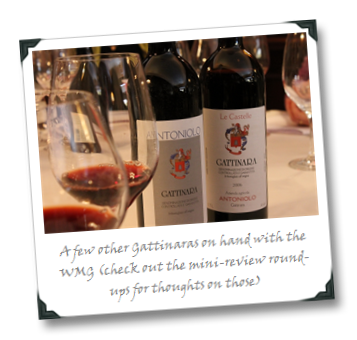 The 2005 Travaglini Riserva (around $59) is about ready to roll: stewed plums, soft leather, it’s smooth, pretty, and just coming into its own. The 2001 (around $50) is starting to brick up in color (as Nebbiolo is bound to do), and is earthier but really vibrant and alive with red plummy fruit; and if you’re into the classic dried orange peel and citrus pith thing of Italian reds, you’ll want to seek this out.

The star of the show, though, was a 1995 Travaglini Gattinara Riserva – soft, lovely, cherries falling right in the garden dirt; I picked up perfume, orange rind, leather and even some Brussels sprout action on this wine, and its acid structure is no longer sharp, it has round edges to it… it’s entering “down comforter” territory for your mouth. With food, it was just as gorgeous as any well-aged Barbaresco I’ve had, and likely was a damn sight cheaper when first released.

A highlight is the most recent release, available in about four months, which might get your mouth watering for some Northern Italian fare:

Riserva wines in Gattinara must be aged for four years minimum, so the 2006 will be the recent release when it Pam Bay importers brings it in to the U.S. market soon. Cinzia Travaglini couldn’t hide her enthusiasm over this wine, or over the vintage. “It’s…. it’s… beauuuuuuutifuuuuuul” she drawled in thick Italian accent when describing it. And she’s right. In a somewhat ironic twist for this old school wine, it had the most “modern” profile of any of their Riservas on hand at the WMG tasting. The pucker-up tannins are actually finely-grained, and the complexity of the wine is just fantastic: leather, cola, perfume, red and black plums. There’s substantial grip here, but you could get away with drinking it now by letting it air out for several hours in the decanter and then fixing it up some mushroom risotto, with which this wine will completely rock your head like Frank Zappa’s Shut Up ‘n Play Yer Guitar because yes it is, really, that awesomely funky.

12 thoughts on “Cleaning Barolo’s Clock? (Going Old School With Travaglini’s Recent – And Not So Recent–Gattinara Vintages)”