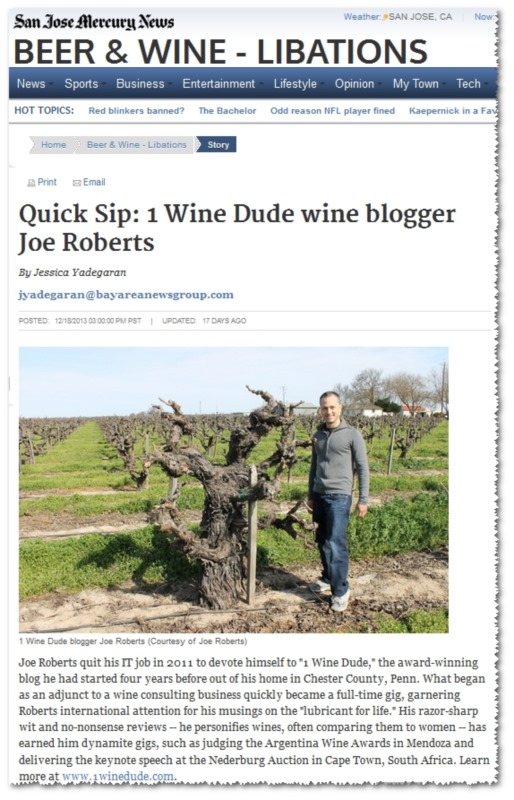 I was recently (ok, more like a month ago) Quick-Sipped (Supped?) by Jessica Yadegaran, in a profile/interview that ran online and in bay Area papers such as The San Jose Mercury News. It (very) briefly tells my wine backstory, and gave me an opportunity to implore people to drink more Vermentino (with fish tacos). So I didn’t squander the opportunity, Vermentines! 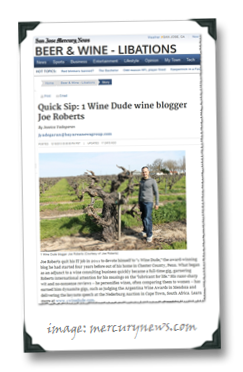 Interestingly, Mercury’s parent company, Media News Group, is expanding its food and wine scene coverage, at a time when most others are contracting theirs. MNG seems to be making a play for what will almost certainly be a media gap in the San Francisco region: trendsetting the wine and food scene, now that the #1 seed, the SF Chronicle, is planning to radially change its food and beverage coverage.

I’m not sure how else to take the comments from SF Chron managing editor Audrey Cooper, in her response to the NY Times breaking the news late last year on the SF Chron’s planned Wine/Food section shakeup:

“We are undergoing a newspaperwide section-by-section review with the idea that we need to reimagine sections to more intuitive cultural topics that are more aligned with how Northern Californians think and live.”

My translation: we’re not going to spend the money and effort to set regional dining and wine trends anymore, because it’s not working out; we’re going to react to the trends already being set by others, instead.

The Chron’s wine and food coverage can’t be inexpensive to run, and despite the spate of well-deserved awards, at the end of the day enough bacon has to be brought home to justify the expenses.

Overall, the changes will almost certainly be a loss for U.S. wine media in general. And if the Chron’s idea of their newly-styled wine coverage is this sort-of-fluff piece on the Trefethen kids (who were, I think, unfairly maligned in the comments of that article, by the way), then I’m pretty sure every other SF Bay area media outlet can safely declare “open season” on the wine+food media crown for the region.

I’d love to say that it will be even more interesting to see how this all eventually pans out, but since a) I live on the Right Coast (where no one is touching the NY Times for the wine/food media bragging rights anytime soon), and b) I haven’t read a traditional newspaper in nearly twenty years, my opinion is ridiculously tainted. But that, of course, wing so me from sharing it (hey, it’s my blog), so if you’ll indulge me a brief moment to opine… I’m not sure this is all any more than a tempest in a wine glass. The fact that newspapers are struggling to stay relevant and profitable is not exactly new news; we ought to expect changes, many of them big and disruptive, as they attempt to stay afloat. Those changes might get media folks in a tizzy, but the average wine drinker is as likely to get all worked up over them as I am to take up needlepoint.

14 thoughts on “Anyone Else Notice That Bay Area Wine & Food Trendsetting Is Up For Grabs?”