Vinted on January 26, 2009 binned in best of, commentary, learning wine 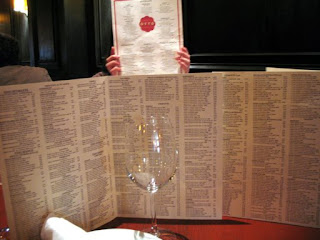 With the recent review I penned for WCDish.com, I’ve had restaurant wine lists on the brain lately.

Which means that this post will likely be ill-timed, given the dearth of restaurant-goers in an economy that is wading knee-deep in layoff announcements. Oh well – timing was never one of my strong suits.

Anyway, as a semi-educated wine geek, I fully appreciate that I might approach a restaurant wine list in a slightly different way than the average diner, in that I might have a deeper knowledge of what the foreign word mean, or what the wine is supposed to taste like from region XYZ.

But… at the restaurant table, while I may have more trouble with tip calculation due to my mathematically-challenged brain, my wine list perusal goal is no different than the average restaurant goer’s: find a good bottle of wine at a decent price that will go well with dinner.
Which is why I think that huge-ass restaurant wine lists suck.

Tyler over at Dr. Vino recently posted an article about a Tampa restaurant (Bern’s) that might be of interest to those who will be traveling to Tampa to watch the STEELERS trounce the Cardinals in Superbowl XLIII. Bern’s boasts 6,800 selections and more than 500,000 bottles. I don’t even want to see that wine list.

For me, dozens of pages detailing hundreds of choices of wine amounts to two things:

And the wine geeks out there will appreciate that it’s always you that has to pick the wine – and the larger the wine list, the faster it will get tossed your way by the other dinner guests. 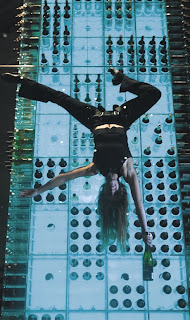 A few years ago I took a trip to Vegas (baby, Vegas) and caught up with some old college friends of mine. We decided to grab dinner at Aureole, the restaurant with over 800 bottles of wine, which are stored in a glass tower and retrieved by babes on hoists.

The wine list is a tablet PC with a touch screen, with which you can browse and search the wine offerings. Sounds like a time saver, but it turned into exactly the same type of curiosity / distraction. While trying to settle on one of the 800+ bottles, I spent too much time looking at the bottles of 1925 Chateau Légendaire Maison Pompeux* that cost more than my car, and not enough time enjoying the conversation with my friends.

And after all, what’s better – oohing and ahhing over a list of stuff you can’t afford to drink, or drinking something good and sharing it with friends?

In my book, there’s no contest.

Kind of like there’s no contest in the upcoming Superbowl…