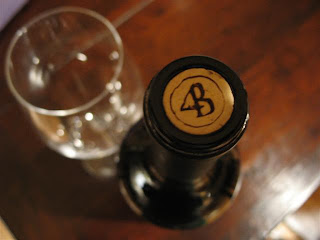 Hey, remember the recent Wine Bloggers Conference? Not that I haven’t mentioned it a gazillion times or anything.

Anyway… one of the more interesting experiments conducted on both bloggers and winery representatives was on day one of said conference, when we played a very large game of wine review “speed dating.”

In summary: bloggers were seated in a large conference room, about eight or so to a table; winery reps. rotated at set intervals between each table; each set of reps. had 5 minutes to present their wine to the blogger group, who then tasted and had 1 minute to record their thoughts on said wine, all live. More on the conference and the “speed dating” can be heard on WineBizRadio.com. 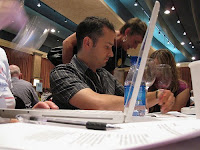 As you might imagine, it was a bit of organized chaos. In my live recap of the event, I basically had enough time to record gut reactions on each wine, and little else. Not that it wasn’t fun, it just wasn’t an ideal environment to really get to know any of the wines that were presented.

Which is why when I was offered a second chance to re-sample one of the producers represented at that speed dating event, I jumped at it.

Sean Minor Wines is a (very) small family outfit in Napa, making Cabernet Sauvignon and Merlot, as well as Chardonnay and Sauvignon Blanc (the latter two under the 4 Bears label), all of them under $20. The backdrop story on 4 Bears (which I managed to capture in my brief speed-dating encounter during the WBC), is that Sean Minor and wife Nicole decided to create their winery after analyzing their finances and discovering that their second largest monthly expense was (you guessed it) wine (presumably, with four children – after whom the 4 Bears label takes it name – their largest expense was the kids?).

According to their press release:

Rather than taking his start-up capital and investing it in the bricks and mortar of a
winery, Minor decided to build his business as a negociant by sourcing out grapes and
some already fermented wines from Napa Valley, Sonoma County and California Central Coast appellations to create his wines. The wines themselves are made in a leased facility in Napa County where Minor ages, blends and bottles the wine under the Sean Minor label. “As a negociant I’ve been able to really center our efforts on making a top-quality wine,” said Minor. “My efforts are spent creating impeccable tasting wine and personally introducing it to people throughout the country.”

During the WBC speed-dating, I managed to capture this about their `06 Cabernet:

Four Bears – one guy and his wife are the total staff, who started making wine (via co-op) to offset their growing wine drinking budget! My kind of folks… 06 Cab Sauv. $17 (Napa Valley). Very accessible, but not without depth (the cedar element is a nice touch).

I guess the self-made family thing really struck a chord for me. Anyway, from what I recalled of the day, the wine was good, priced to move, and was more than just a one-trick-pony.

So… how do their wines stand up outside of the heated excitement of wine speed-dating?

Pretty well, it turns out. 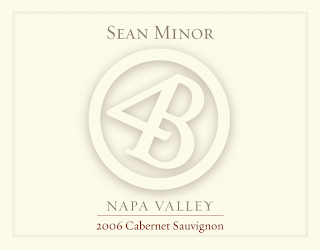 At their best (as in the case of the Cab.), the wines offer a depth that I would consider slightly beyond their price point, making them a very good value. At worst, the wines are still very tasty and certainly priced fairly, really only lacking in the length of finish and the simplicity of their secondary aromas; otherwise, the fruit is all California and they deliver appropriately.

My mini-reviews on each of the 4 Bears wines:

05 4 Bears Chardonnay (Central Coast, CA): Tropical fruits balance with good oak, but you need to like butter (if so, you’ll like the price)

For more happenings at 4 Bears, check out their blog at www.4bearswinery.com/blog. I will leave you with a shot of my own assistant “bear” sommelier: 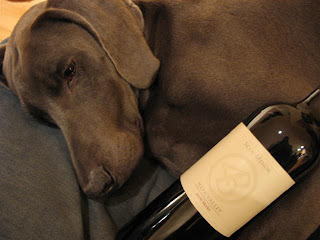