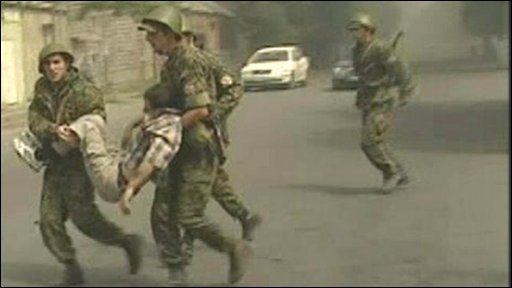 Just to bring a bit of palpable focus to the ongoing conflict in Georgia, I thought I’d highlight a few of the wine-related impacts of the fighting that is making worldwide news headlines:

Georgia’s Caucasus region is widely believed to be the birthplace of wine, based on archeological findings of the oldest known cultivated vines. Georgian wine is still made, and its unique tastes and grape varietals (most notably Saperavi) are highly regarded, with their wines being widely sold in Europe – with the potential to generate increased sales in the international wine market, as well…

The current conflict is taking its toll on Georgia’s wine trade. Russia, probably the largest purchaser of Georgian wine, had already placed a block on sales of Georgian wine. As you can imagine, most business in Georgia has slowed during the conflict, and among those protesting Russia’s actions this week have been importers of Georgian wine.

Here’s hoping that the conflict ends as soon as possible – and that Georgian wine, and the historical wine treasures of Caucasus, escapes relatively unscathed.