Ethics and Wine Blogging (or "Ouch! I’ve Got a Neck Cramp From All This Navel-Gazing!")

Seems I can’t go a week these days without getting embroiled in one wine blogging controversy or another. 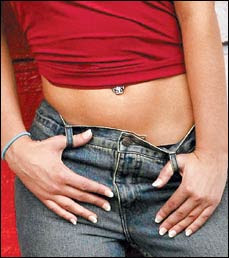 Let’s see… how do I recap this so it’s not mind-numbingly boring for people who came here thinking they might be reading about wine?

See, apparently, that’s not what wine bloggers like to do anymore (I know… I didn’t get the memo, either!). Instead, they talk about themselves… which will be cool to do during the upcoming Wine Bloggers Conference in Sonoma, but isn’t so cool to do on wine blogs themselves.

Where readers come to, well, read about wine stuff.

And not to read about wine blogger navel gazing stuff.

But… in this case I will need to talk a bit about wine blogging because it actually involves YOU – the readers of wine blogs (I know this is difficult now… but someday, I think you’ll forgive me, and our relationship will grow stronger… and we’ll finally take that get-away-from-it-all trip to Vancouver tat we’ve been planning… just the two of us…).

Let’s recap: Regular 1WD dot com readers will recall that I was part of an innovative blogging experiment, headed up by Jeff over at GoodGrape.com, to be among a select group of bloggers to taste the innagural release of Rockaway Vineyard, a new allocated California Cab.

Tom Wark (fermentation.typepad.com) and Steve Heimoff of Wine Enthusiast (www.steveheimoff.com) in particular both questioned the ethics of the experiment participants for agreeing to write about Rockaway as a condition of taking part in the experiment (and receiving an advanced sample of the wine). Tim over at Winecast.net has a great summary of the whole thing, which you can check out here.

The funny thing is, no one who’s written about the ethics of the experiment has yet to validate their assumptions with either Rockaway or the participants.

I tried to clear things up on Tom’s blog in his comments, but let’s just say it ain’t easy convincing a group of green cheese lovers that the moon is made of rock. Even when you’ve got a sample stone in your hand.

For those of you who still care (sorry, I’m trying to make it as “non-boring” as possible), I actually have a Code of Ethics that’s been posted on my site for well over a year. As far as I can tell, it wasn’t violated by me taking part in this experiment. Sure, I agreed to write an article, but I agreed that with my editor (Jeff at Good Grape), not with a winery. And I didn’t see anything wrong in an editor stipulating receipt of an article as grounds for participation.

I mean…. DUUUUUUH…. wouldn’t a journalist get fired for consistently not producing articles for an editor by a deadline? If not, then I’ve changed my mind, and I really do want to be a journalist! Sounds like a sweet gig!

Instead of talking about ethics, maybe wine bloggers should be talking about Journalism 101 and Reading Comprehension? Or (egads!), wine?

Anyway – now you’ve got the background, and you’ve got my take, and you’ve got my Code of Ethics. And that is important, to me at least – I’m writing this blog because it’s fun, but mostly because I genuinely love sharing wine knowledge with you. I’m certainly not writing it for other wine bloggers (though they’re more than welcome to participate).

I trust that you’re smart people, and all-grown-up adults (at least, I hope so considering you’re reading a blog about an alcoholic beverage…), and therefore I trust that you can make up your own minds about my ethics.

THANK YOU to those who have contacted me with your words of encouragement and support. It’s literally kept me from hanging up my bloggin’ spurs these past couple of weeks. And for that, you have my (possibly non-journalistic and unethical) gratitude, always!