3 Things Your Dog Can Teach You About Wine Appreciation 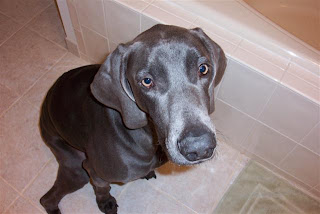 While I don’t hate cats, I don’t love cats, either. Mostly, I get along best with the cats that think they’re dogs anyway. Since this post is going to be about my schooling of wine appreciation literally going to the dogs, my apologies in advance to those who are cat lovers. I’ve never been taught anything about wine appreciation from a cat (more on learning wine stuff from domesticated house pets in a minute) – though they have taught me the art of totally ignoring people.

Dude here has been given primary Dog Duty at the House of Dude. I’m the one who now has to feed and walk our Weimaraner, Samson (see pic above).

By observing Sam, I’ve actually learned a bit about wine appreciation. And no, it doesn’t involve drinking so much that you want to sniff someone’s butt, unless that’s your thing (licking yourself is also optional). Though it does apparently involve startling segues from dog licking to wine tasting… maybe I should have thought about that one a bit more…

Anyway, straight from the home office in suburban eastern-PA, here are 3 Things that Your Dog Can Teach You About Wine Appreciation…

Turns out there is a lot of merit in that approach if you really want to smell something thoroughly – and in the case of wine, smelling is where you will get about 80% of your enjoyment and appreciation. Shorter sniffs help to focus your olfactory senses, and may also help to keep your sense of smell from fatiguing too quickly. The sharper your sense of smell, the more you can pinpoint what aspects you like (or don’t like) about the wine that your tasting.

In the case of wine, smelling is where you will get about 80% of your enjoyment and appreciation for your glass of vino. 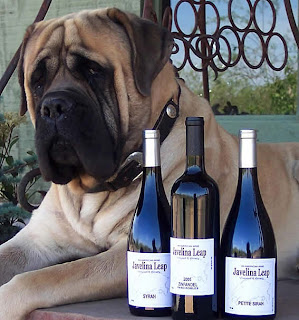 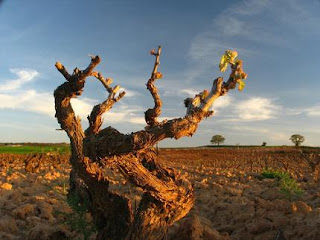 What’s up with Spain, anyway?

And for that matter, Portugal?

Few wine regions are currently as exciting and vibrant as Spain and Portugal. Not too long ago, they were producing wines of specious quality, suffering from a similar Old World wine funk that once engulfed the (now impressive) wine regions like Chianti of Italy.

But now? Now the Iberian peninsula is kicking out quality wines all over the price-point spectrum. I’ve had killer Vinho Verde and Cava that have made me do a triple-head-take cartoon-style to verify that they really were that cheap. And don’t get me started on the screamin’ Priorats, aged Madeiras, and vintage Ports that I’ve tasted. Yowza!

Case in point – just so you don’t have to take only the Dude’s word for it:

“Spain continues to overperform… the number of truly fine Spanish wines continues to increase, with at least as much excitement at the lower end of the quality scale as at the higher end… Portuguese winemakers have now woken up to the tremendous potential that their country offers, making it a hotbed of innovation.” – Tom Stevenson, The Sotheby’s Wine Encyclopedia

BUT… with all of that Iberian awesomeness… why the heck do I find it so hard to consistently recommend good Iberian wines at a decent price point?

I posed that question to the wine blogging world’s resident Iberian wine experts, Gabriella and Ryan Opaz of Catavino.net, when I took part in their 2+1 Iberian wine survey. I’ve reprinted their answer here, as I think it sheds some very interesting light on the marketing situation facing Iberian winemakers and wine distributors today (thanks, guys!). Enjoy…

Mi pregunta: Why are good Iberian wines so damn hard to find in the States? Spain & Portugal are poised to take the wine world by storm in terms of value for money, but most people’s experience with them comes down to seeing a $45 Priorat in their local wine shop and passing it on by, or picking up a $10 Rioja that is plonk and never touching Spanish wine again. Ironically, most of their wines offer incredible quality for the price, except the ones we get here. What’s up with *that*? 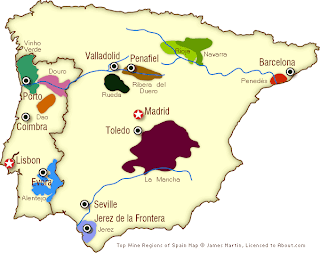 Joe, we wish the answer was easier to give. Truth is, there are a lot of Iberian wines available, although we believe the rush to exploit them has been slowed down by the strength of the Euro. Up until this year, everyone wanted a new Iberian wine for their portfolio and were willing to spend a lot of money to obtain them. Today, however, that same money doesn’t go as far. Coupled with this, people are afraid to see Iberian wine as more than “good value”. Many of our best value wines are spreading across the States and selling well, but in the end, it’s time to spend a bit more in order to diversify the availability.

Many of our best value wines are spreading across the States and selling well, but in the end, it’s time to spend a bit more in order to diversify the availability.

Then, there is the country specific problem, i.e. nationalism. Spain will never have the ability to market itself as a brand, no matter how much Wines of Spain tries and fails. There are too many distinct cultures and political divisions throughout Spain for this to work. Thus, Spain will always end up having fragmented marketing campaigns that will never fully co-operate to achieve good, unified branding.

Portugal, on the other hand, is set to overtake Spain, because at least they can have a “brand Portugal”, but sadly, a lot of their brand equity is tied up in the Port houses, and it’s not easy to convince them that they should help the smaller appellations. Additionally, Portugal has a confusing system of Appellations, where you have the highest “quality wine” category (DOC) falling below the wines of the “lower” regional wine category (VR). We don’t think it hurts the retail sector, per se, but it does hurt the in country’s organization and how it presents itself. The final factor that that weakens “brand Portugal”, is the overwhelming presence of the Vinho Verde, Douro and Alentejo regions. Until the smaller regions gain a little spotlight, these main three big guys will always overshadow the smaller ones.

Spain will always end up having fragmented marketing campaigns that will never fully co-operate to achieve good, unified branding.

Think of it this way. French wine is considered good, with wines of quality coming from Bordeaux, CDP, Burgundy, etc. Here, Rioja wine is great, which happens to be from Spain. Port wine is historic, but that is from the English (seriously people have told me this). Vinho Verde is fresh and vibrant. Cava is the “other sparkling wine”. Clearly, we’re fragmented. Portugal and Spain both need to be known for great wine. As you say, people see the $45 Priorat, and only associate it with the region, but never the country.

You can read the entire article over at Catavino.net.

For more on Spanish wines, you can check out The New Spain by John Radford. 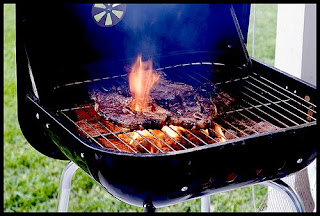 For those of you in the U.S. of A. – apologies again to my (now probably seriously dwindling) International readers! – it’s Memorial Day.

That time when we in the U.S. partake in the American pastimes of family gatherings, and patriotic remembrance, and – best of all – charing meat over an open flame until it is covered in crispy, tasty, blackened carcinogens.

And also trying not burn our houses down.

There is but one method of cooking appropriate for Memorial Day – and that is good ol’ fashioned grilling.

…And that wine is Zinfandel.

Never mind that Zin is actually the southern Italian grape Primitivo. Or that it’s probably originally from Croatia. If there is one country to embrace a melting-pot Italo-Croatian creation, it’s the good ol’ U.S. of A., baby! Zin is the (fruit) bomb. It’s over-the-top jammy goodness (we’re talking the unadulterated Zin grape here, not the sweet, blushy White Zin). It’s so good that it’s got its own fanclub.

Especially at the BBQ. That’s because Zin’s flavor is so bold that it stands up to just about any char grilled goodness (including your famous, spicy-sweet, secret-recipe BBQ sauce) that you might concoct this long holiday weekend.

Zin has been grown in some way/shape/form in the U.S. since the 1800s, taking off in CA after
speculators turned from the Gold Rush to agriculture for their fortunes. As a result, CA has a good amount of old Zin vines. And the older the vine, the lower the grape yields, the more concentrated the fruit, and the higher the potential quality of the resulting wines.

Zin grapes tend to ripen a bit unevenly in tight clusters. What this means is that if most of the grapes are left to achieve full ripeness on the vine, some of the grapes in the same cluster will have shriveled into concentrated, raisiny goodness. Hello, alcohol! (More Zin facts and history can be found in The Oxford Companion to Wine). 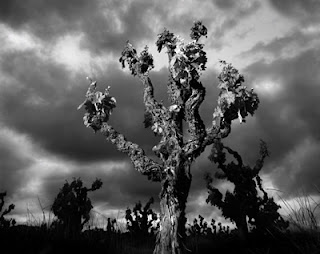 That fruit is gonna successfully go toe-to toe with anything that you can throw at it this weekend – just like us Americans.

As for recommendations:
For those on a tight budget, you’d be hard-pressed to find better Zin value for your buck than Ravenswood.

On the “let’s splurge!” end of things, I like Duckhorn’s Paraduxx Zin blend.

Vinted on May 23, 2008 binned in pennsylvania, wine industry events

I don’t normally plug events here at 1WineDude.com, but I couldn’t pass up the opportunity to give some press to this shin-dig, because I am totally into what both this restaurant and this winemaker are doing.

NOTE: The following is a Philly-area event (much apologies to my Left Coast and International readers!).

Teikoku is serving up some of the most killer Asian fusion food in the greater Philadelphia area. And Penns Wood Winery is making some of the most daring wines in all of the East Coast (hello? Sauvignon Blanc, anyone?) – and they now own the old Smithbridge wine property (a stone’s throw from Chaddsford), which is capable of producing some of the best grapes in the area.

If you’re in the area and can make it, I highly suggest checking it out.

$95 per person (Does not include tax and gratuity)

Executive Chef Takao Iinuma – Takao is one of the world’s great Japanese chefs. An accomplished student at ’s prestigious , where he learned everything from French technique to traditional Chinese cooking, Iinuma went on to teach there for eight years. His education also included an apprenticeship at the Karin in the , one of ’s top restaurants. He has competed in 40 episodes of the popular Iron Chef Japan, winning 75 percent of his match ups. It was during this era that he befriended world famous Chef Masaharu Morimoto, who became his culinary mentor. Chef Iinuma went on to become executive chef at Morimoto restaurant in and Wasabi by Morimoto in , where he helped the chef open both locations. He was also appointed corporate chef of Morimoto in The Iron Chef still calls upon Iinuma for advice before going into culinary battle.

Winemaker Gino Razzi- The Abruzzi-born Razzi, a well-known wine importer and a maker of highly rated wines in , knows what he’s doing around grapes. His “Symposium,” a profoundly good montepulciano d’Abruzzo, has won 90 points or better from the Wine Spectator ever since the first vintage (1997) was issued. Penn’s Woods is one of the latest additions to a boom in wineries, which have nearly tripled since 1999, from 42 to 122 in late 2007. Razzi’s extreme commitment to making only the highest-level wines possible coupled with his superb palate and winemaking instincts, refined by nearly four decades in the importing business is a departure from the approach taken by many of the state’s wineries, which feel obliged to create a wider range of styles and prices to appeal to a mass-market audience.